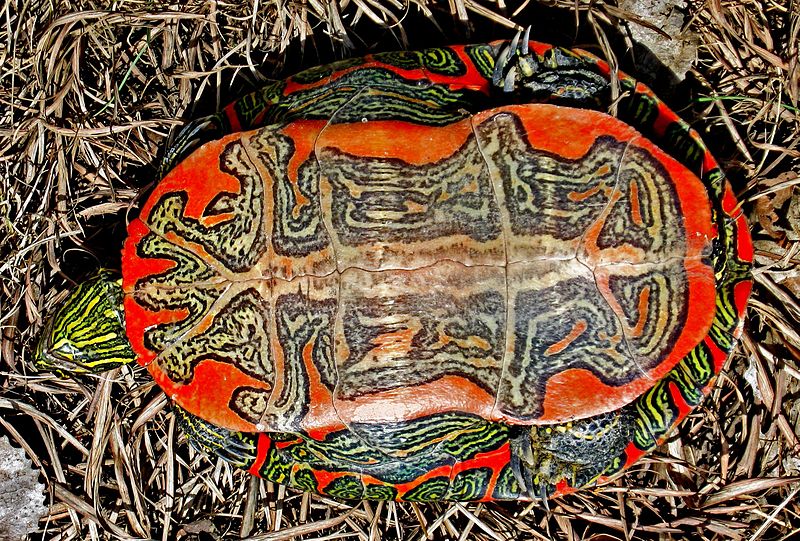 Photo ©2011 Matt Young
Click any photo for a larger image 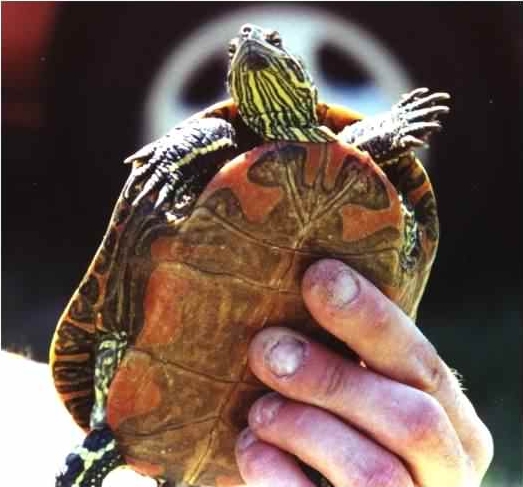 The Painted Turtle – Chrysemys p. b. is superficially similar to the Red Eared Terrapin with similar striped neck markings but they lack the red "eye" flashes.  The most widespread native turtle of North America comprising four regionally based subspecies (Eastern, Midland, Southern, and Western), it is the only species of the genus Chrysemys, part of the pond turtle Emydidae.  Adult females are 10–25cm (4–10in) long weighing on average 500g (18oz), with the males being smaller at 7–15cm (3–6in) and 300g (11oz).  Males have longer fore claws and a longer, thicker tail.  its top shell is dark and smooth, its skin is olive to black with red, orange, or yellow stripes on its extremities.  The bottom shell (plastron) is an overall red with a central multi–coloured banded patch mimicking the neck and leg colourations.  They will freely interbreed with the Red Eared but usually grow to a slightly larger size for a similar age.  Botanical description for Picta

Painted Turtle are members of the genus Chelonia referring to reptiles with a shell, with nearly 250 species in the genus.  In the United States this genus are usually referred to as turtles, however in the UK they are split into Turtles (aquatic), Tortoises (land) and Terrapins (semi aquatic).  They eat aquatic vegetation, algae, and small water creatures including insects, crustaceans, and fish.  In their native habitat they are frequently consumed as eggs or hatchlings by rodents, canines, and snakes, the adult turtles hard shells protect them from most predators.

In all other respects its habit, behaviour and temperament is like the Red Eared.  They are active only during the day when it basks for hours on logs or rocks.  During winter, the turtle hibernates, usually in the muddy bottoms of waterways.  The turtles mate in spring and autumn, females dig nests on land in sandy or light soil and lay eggs between late spring and mid–summer.  Hatched turtles reach sexual maturity in 2–9 years for males and 6–16 for females.  Adults in the wild can live for more than 55 years.