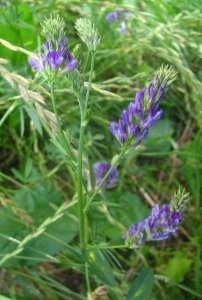 An almost world wide forage crop for domestic animals.  Derived from an indigenous species M. coerulea from Iran and local areas.  Apparently used as a horse feed from about 1500Bc, by 400Bc it was being grown in Europe.  Several cultivars exist from Hybridisation with other European wild Medicago species.  It has an extensive root system which can be 6m (19ft) deep in some soils giving it a rich vitamin, protein and mineral content.  Lucerne grows best non–acid soils, growing particularly well in limestone derived soils.  Widely use by herbalists for many differing treatments using the flowers, leaves and seeds.

A downy perennial with spikes of purple to deep blue flowers 6–9mm (0.25–0.35in) long similar in shape to pea flowers, winged, with darker purple to black veining, as a loose raceme on a stalk from the leaf nodes, trifoliate leaves narrow elongate with slightly toothed edges.  Overall appearance similar to Sweet Pea but without the tendrils and having a more compact habit.

Naming - "Alfalfa" is derived from the Arabic "al–fac–facah" meaning "father of all foods", the genus name, Medicago, refers to Medea in North Africa from where this plant is thought to have originated and the species name, sativa, means "with a long history of cultivation".