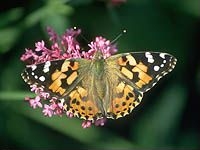 Wing span 5–7.5cm (2–3in), wings are an orange/brown, triangular black wing tips speckled white, black outer wing borders scalloped with pale orange/yellow.  Males and females are alike.  An almost world–wide species, widespread except for South America, the Arctic, and Australia.  Found in disturbed areas, gardens, fields, grasslands and dunes, they are mainly a migrant species to the UK.  Their predilection for Thistle has given rise to their common name, and the "Cosmopolitan" for its worldwide distribution.  Can be seen from late January to October.

A green, barrel–shaped eggs are laid singly on a host plants.  Caterpillars have been found on some 100 host plants, favorites include Thistles, Hollyhock and Mallow, also various legumes (Fabaceae).  The colour of the caterpillar varies from chartreuse with black marbling to a yellow/purple, pupating in a small silk nest on leaf tops.  Adults nectar from Thistles, Aster, Red Clover and Wild Privet.  Generally not living for more than one year, only the adults over winter to the next year and only in warmer climates.  They are predated upon by spiders, birds, ants wasps and insect eating invertebrates.