A large deciduous tree with distinctive black buds in spring and an untidy round crown, widespread and common particularly in N. England, it grows abundantly in hedgerows, meadows and woods to about 25m (82ft) but can reach 45m (148ft), and can reach 200 years old.  Can be coppiced, commonly cultivated in the weeping form.  Grows on most soils except poorest and acid soils (above pH 5.5), but prefers moist and well–drained fertile soils.

bark is a grey colour, with fairly smooth twigs bearing large black buds and tiny purple flowers during April to May before pinnate leaves of up to twelve sessile slightly oval leaflets appear.  Flowers ripen to winged narrow seeds about 25mm (1in) long on slender hanging stalks in sprays.  Grows quickly in the first 30 to 40 years but stops at 60.  Pale coloured wood is strong and springy and has been used for furniture veneer, Hockey sticks, oars, paddles, rudders, billiard cues, cricket stumps, polo sticks and policemen's truncheons.

Ash Dieback Disease –
Recent discoveries have confirmed a new disease of Ash trees and some derivatives.  Ash dieback or Chalara dieback of Ash trees is caused by a fungal infection of Hymenoscyphus fraxineus.  Potentially a serious threat to Ash tree stocks in the country, it attacks Common Ash – Fraxinus excelsior and ornamental forms, Raywood Ash – Fraxinus angustifolia is also under threat.  Typically young saplings are killed within a year of infection, older trees may take several years to succumb.  Thought to be spread by wind borne spores of the fungus, the disease causes leaf loss and crown dieback in affected trees, and usually leads to tree death.  A map of the current infestation state of Ash dieback can be found at the Forestry Commissions website, which shows cases reported from the whole of the UK, with hot–spots in Kent, East Anglia and Northern Ireland.  Some infestations are thought to be from infected stock in UK nurseries received from the continent.  It is believed the disease originated from the Polish region where large numbers of trees were reported dying in 1992, whilst Ash dieback was first reported in the UK in 2012.

H. fraxineus is now being treated as a quarantine pest under national emergency measures and any suspected sighting must be reported.  As of July 2013, 541 cases have been reported in the UK.  To prevent further spread of the disease in Britain a Plant Health Order prohibits all imports of Ash seeds, plants and trees, and all internal movement of Ash seeds, plants and trees. 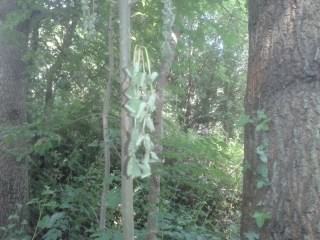 June 2016 update - Recently, Ash Dieback disease was found in Brickfields Park (see photo right above).  The affected tree, a small sapling of about 4m in height was found with what appeared to be the classic symptoms of the disease, all of the top shoots had wilted and several weeks later they had all turned black, lower down all shoots were showing excessive growth, a tree in trouble.  Samples of the tree were taken for confirmation, in the last few months more small diseased saplings have been found and other larger diseased mature trees have been seen in the local area.     Now confirmed, the affected tree has been cut down and burnt.

Bacterial Canker of Ash –
Ash can also suffer from Bacterial Canker and this has been found on a couple of Ash trees in Brickfields Park.  Called Ash bacterial canker, it is caused by the bacteria Pseudomonas syringae ssp. savastanoi pv. fraxini, it is not related to Ash Dieback disease.  Previous wounds in the bark and on stems, branches and twigs are invaded by the pathogen which develops into lesions that may exude a sticky fluid.  Over time the bark dies and peels back revealing the wood underneath.  It can also develop into dark cork like growths.  Trees with Bacterial Canker can live for many years and be hardly affected; others may develop large lesions and growths fairly quickly, succumbing in the process especially if the lesions ring the trunk or branch.