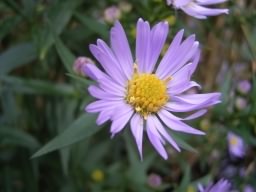 A native American species, the New York Aster was introduced to the UK in the early 1700s.  It is an upright perennial found throughout the UK often in damp ground or close to streams growing to between 50–120cm (19–60in) high depending on conditions.  It can grow on nutritionally poor soil, in semi–shade or not and can be found growing in brackish and tidal fresh marshes, occasionally salt marshes, shores and other moist areas but does require a well drained soil.

The common name of Michaelmas Daisy is derived from the belief that the flowers traditionally bloom on September 29th, in the UK the Feast of Saint Michael, the warrior saint of all angels.  The species name novi–belgii, Latin for "of New Belgium" is from an early name for New York.

They flower from late July to October providing late flying butterflies such as Peacocks and Small Tortoiseshell with a good source of nectar.  Hermaphroditic flowers of 15–25 petals in varying shades of blue, lilac and purple with bright yellow centres, hundreds of cultivars exist.  They are pollinated by bees, butterflies, flies, beetles and moths.  The leaves are elliptic to linear, smooth to scabrous above and glabrous beneath and clasp the stem.