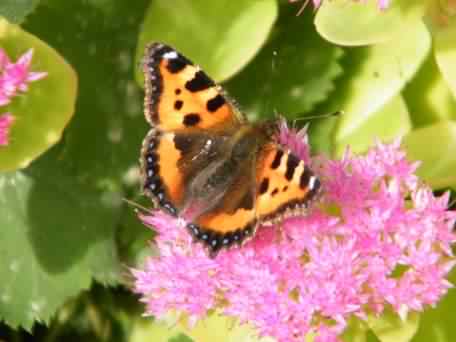 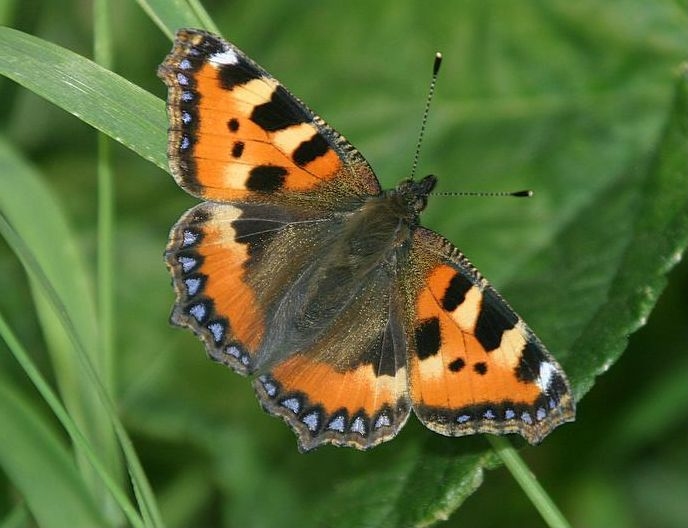 A common European butterfly resident in the UK with a wingspan of about 50mm (2in).  Hibernating males and females appear early in the spring producing broods during May to October.  The tortoiseshell has upper wings of marbled orange, yellow and black, and under parts of smoky brown.  Wings have a ragged torn edge with a chocolate brown band at the outside edge.  Dark brown spots mottle an overall brown or dark orange wing.  The front pair of wings can have a band of yellow–black stripes on the leading edge.

The gregarious caterpillars are black with yellow green stripes down the body and spines, and are usually to be found feeding on Nettles, and occasionally Hops, both found in Brickfields Park.  Frequents hillsides, clearings, fields and gardens, often found inside windows in cellars Etc.  Sun loving, it is one of our most familiar butterflies, appearing in gardens throughout the British Isles.  The Small Tortoiseshell is showing a decline in numbers, on theory is the increasing presence of a parasitic fly Sturmia bella which lays it eggs on the butterflies larva food plant, the eggs are consumed and the grubs that emerge feed on their host.