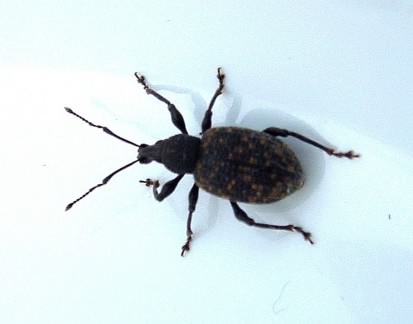 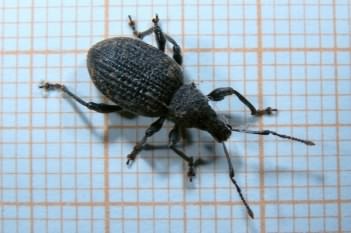 Native to Europe, but common in North America as well, Vine Weevils are a pest of many garden plants.  Found over most of the UK but not in the very far North.  Parthenogenic adults (no males) grow to 8–11mm (0.3–0.45in) in length are characterised by their short snouts, stout swollen bodies, elongate elbowed antennae and enlarged femurs on their legs.  The adult weevil is a matte black colouration with feint pale yellowy spots and fused wing covers, so is unable to fly.  Eggs are laid each spring developing into legless larvae.

Both the adult and larval stages are damaging to seedlings.  The adult weevils live above ground feeding on cotyledons and on the bark of seedlings at night.  Up to 500 eggs are laid into the soil over a 2–3 week period developing into "C" shaped larvae growing up to 1cm (0.4in) in length, with a creamy–white legless body, tan–brown head, superficially they look very similar to fly maggots.  They live below the soil surface feeding on plant roots causing most damage to herbaceous plants, particularly those growing in containers, where root growth is restricted.  Severe infestations can result in complete root destruction and hence plant death.  The grubs can be controlled using parasitic nematodes which can be bought from some garden centres.  They are simply mixed with water, and watered onto the soil.  Adult weevils can be controlled by using sticky barriers on the trunks of affected plants, as the weevils return to the soil each day.  Half–grown larvae can over winter in the soil.

The common name, Vine Weevil, derives from its European status as a pest of vines although the species is polyphagous and may be found attacking a very wide range of cultivated plants.  Its other common name of Taxus weevil comes from its preponderance for Yew.