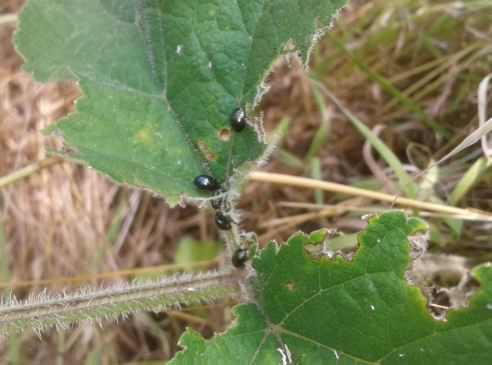 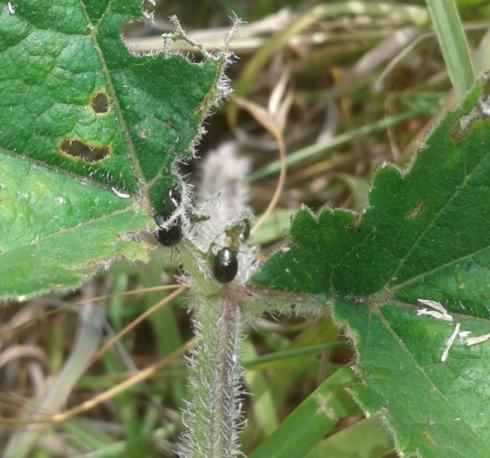 The Willow Leaf beetle, as its name might suggest, is a beetle that feeds on various Willow species, of which there are five in Brickfields Park, Crack Willow, Goat Willow, Grey Willow, Weeping Willow and White Willow.  It is a European species now found as an alien import in the USA where it also feeds on Cottonwood trees.  It is not widespread in the UK however, being more common in southern and eastern counties and rarer northwards suggesting it is also an import here.  Adults are a very dark blue or green, almost black, with a bright metallic sheen, 4–5mm (0.15–0.2in) long, producing two sometimes three generations a year from May to September.

Hibernating overwinter in loose tree bark or leaf litter, adult Willow Leaf beetles emerge in the spring to feed on the new leaf growth.  Females then lay clusters of upright bright yellow spindle shaped eggs on the underside of the leaves, with young larvae emerging a few days later to also begin feeding.  The larvae which are 5–7mm (0.2–0.3in) long appear superficially similar to Ladybird larvae, feed on both sides of the leaves eating the tissue between the veins, skeletonising them in the process.  Depending on the weather conditions the second or third (rarely fourth) generation of adults again seek shelter under bark or in piles of leaves where they will overwinter.