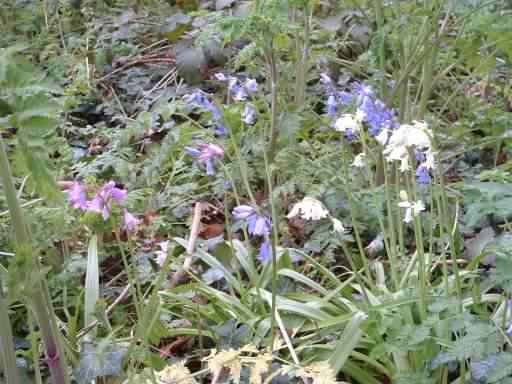 The Bluebell hybrid or Spanish Bluebell is a familiar perennial of north western Europe and the British Isles.  It often carpets whole woodland floors and can also be found in hedges and rough ground, it is now common throughout the UK having been introduced into the UK by the Victorians as a garden plant, but which then escaped into the wild the early 1900's.  The Spanish bluebell can be found alongside our native bluebell in woodlands and along woodland edges, as well as on roadsides and in gardens.  Growing from a creamy white bulb, the leaves are long and narrow, dark green and glossy forming a basal cluster.  Pendant bell shaped violet blue flowers 15–20mm (0.6–0.8in) long in groups of four to sixteen appear April - June as a loose spike on a stem growing to about 50cm (19in) high.  Each flowers fruits to a single triangular (three lobed) pod containing small black seeds 3–4mm (0.11–0.15in) in diameter.  Propagates by bulb division in the summer or by seed in the autumn.

The Bluebell hybrid forms a dense clump of plants that are fully hardy and grow in partial shade on heavy soil requiring plenty of moisture.  Some variants produce pink or white flowers both of which can be seen in Brickfields Park.  Pink bluebells are variants of the Spanish Bluebell – Hyacinthoides hispanica, as our native Bluebell does not produce the pink form, however whites forms can be of the native H. non–scripta or the invasive H. hispanica, although it is rare for the native bluebell to produce the white form.  Bluebells can carpet the ground in suitable woodlands almost to the exclusion of other plants.  Early Purple Orchids, which flower at the same time can also occasionally be found with Bluebells.

Native bluebells are protected by Schedule 8 of the Wildlife and Countryside Act making it illegal to collect native bluebells in the wild for the purpose of selling them.  Indeed it is actually illegal to uproot ANY wild plant without permission from the landowner or occupier.  In law the term "plant" includes algae, lichens and fungi as well the true plants - mosses, liverworts and vascular plants.  Plants are legal property of the landowner and are therefore protected under the Theft Act 1968, where it is an offence to pick plants without the owners permission.

How to tell Bluebell species apart –

How to identify Bluebells - here, courtesy of the Wildlife trusts.

FBCP do not advise or recommend that Bluebell hybrid – Hyacinthoides x massartiana is eaten or used as an herbal remedy.   All Bluebells are poisonous with all parts of the plant containing glycosides that are toxic to humans and animals.  Ingestion causes a lowering of the pulse rate, nausea, diarrhoea and vomiting, large quantities it can cause fatal heart problems.