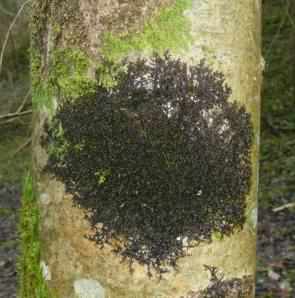 Photo ©2008 Bernd Haynold
Click any photo for a larger image 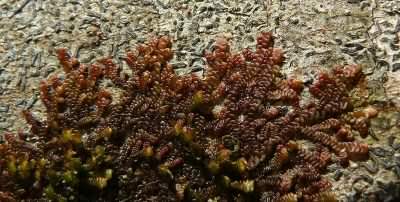 Many thanks to Fay Newbury at Reading University for the identification only of this Liverwort species – Frullania dilatata.

A very common liverwort in the UK on a variety of trees and shrubs, especially Ash, Willow – Salix ssp., Poplar, etc., can also occur on rock and in turf in coastal areas.  Found in well lit forests, forest edges or on free–standing trees over most of Western Europe, Asia and North Africa.  Susceptible to air pollution.  Distinctive green or brown sub–pinnately branched leafy liverwort, leaves to 1mm (0.04in) wide and 1.2mm (0.05in) long, with rounded lobes to the leaves, and large, helmet–shaped lobules which are about as wide as they are long.  The lobes lack modified cells.  Dioecious, male shoots look relatively narrow, and female shoots have warty perianths.