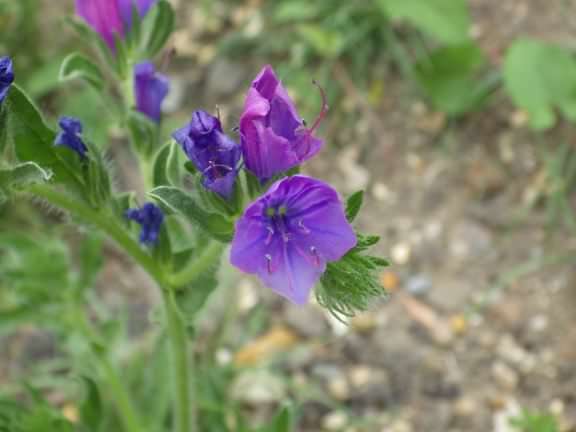 Purple Viper's Bugloss is a spring flowering annual native growing to 20–60cm (8–24in) tall, with rough, hairy, lanceolate leaves up to 14cm (5.5in) long in the UK, western and southern Europe, north Africa, and south west parts of Asia, it is an introduced alien in the USA and Australia where it is classed as invasive. In Australia it has become a dominant broadleaf pasture weed.  Superficially similar to Viper's Bugloss – Echium vulgare, it has a more open growth form with darker purple flowers where Viper's Bugloss tends to a more robust upright pyramidal form with paler blue flowers.

The purple flowers are 15–20mm (0.6–0.8in) long with five petals and borne in clusters on a branched spike to 120cm (47in) high, all the stamens protrude from the flower and curve upwards.  It is a prolific seed producer colonising areas at quite high rates given suitable conditions.  It has high concentrations of pyrrolizidine alkaloids making it is poisonous to grazing livestock especially horses.

Its common name Bugloss is derived from the Greek "bou" for cow or Ox and the Latin "glosso" meaning tongue, which refers to the shape of its leaves, likened to be shaped like an Ox's tongue.

FBCP do not advise or recommend that Purple Viper's–bugloss – Echium plantagineum is eaten or used as an herbal remedy.    It has been claimed that the plant roots when eaten with wine could provide a cure for a snake bites.  Like Ragwort it contains toxic alkaloids and although ragwort has a higher concentration, consumption of Viper's Bugloss could cause liver damage, especially in sheep and horses.  The name Salvation Jane originated in South Australia from its use as a source of food for grazing animals when the less drought–tolerant grazing pastures die off.  Such use requires care and with proper handling, it can be valuable fodder source for cattle and sheep, but not for livestock without a ruminant digestive system.  It apparently has a long history of use in herbal remedies but it can cause skin irritation.