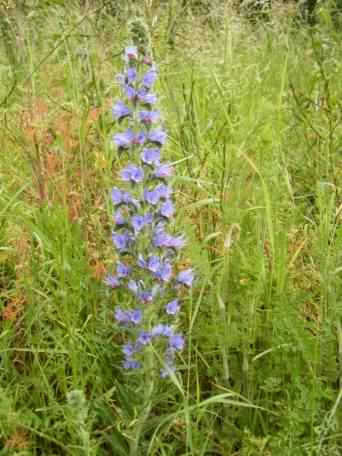 Producing a rosette of hairy strap–like leaves in the first year, Viper's bugloss is a flamboyant biennial wild flower with single tall unbranched spikes of vivid blue funnel or bell shaped flowers 1–2cm (0.4–0.8in) long in panicles, with rough petals and pinkish red tongue–like stamens, growing to around 30–80cm (12–31in) tall in early summer between June and August.  The flowers start off as pink gradually turning to a blue, they have protruding red stamens with blue pollen.  It was voted the county flower of East Lothian in 2002 following a poll by the wild flora conservation charity Plantlife.

Found on dry banks, waste ground, roadsides and grasslands on chalky soils, it is a native of the southern UK, Europe and western Asia, but is also found as an introduced alien species in the north–eastern part of North America where it is listed as invasive in Washington.  It is a biennial or monocarpic perennial with roughly hairy stem and oblanceolate leaves and an extensive and deep rootstock.

Its common name Bugloss is derived from the Greek "bou" for cow or Ox and the Latin "glosso" meaning tongue, which refers to the shape of its leaves, likened to be shaped like an Ox's tongue.

In the Language of flowers viper's bugloss represents falsehood, however it is visited by all sorts of insects, especially bees, hoverflies and butterflies, with the plant being favoured by the Painted Lady and Large Skipper butterflies.

FBCP do not advise or recommend that Viper's Bugloss – Echium vulgare is eaten or used as an herbal remedy.   Historically used as an anti–venom it is also known to be a skin irritant.  Like Ragwort it contains toxic alkaloids and although ragwort has a higher concentration, consumption of Viper's Bugloss could cause liver damage, especially in sheep and horses.