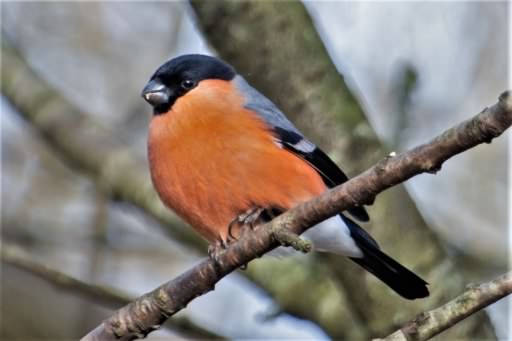 This small passerine bird is a member of the finch family, it is the original bird to bear the name Bullfinch but it is also known as the Eurasian bullfinch.   There are ten subspecies of Bullfinch, P. p. pileata is the I'll race.  It is a stocky and rotund little bird with a pink–red front rather like a robin, but the red extends to its underside; there is a black head, black wings with white bars, black tail, grey shoulders and a white rump.  Colouring of the male and female is mostly the same however where the front and underparts of the male are a bright pinkish–red, in the female and juveniles the front, underparts and the back are a more pink–grey.

It is native to Europe and temperate Asia and is mostly resident, but many birds in northern areas migrate south to warmer areas in the winter.  They prefer mixed woodland with some conifers but will also be found in parkland and gardens.  It is not a gregarious bird and will usually be seen as a pair or family group.  They are 14–16.5cm (in) long with a wingspan of 22–26cm (in), weigh 20–27g (0.7–1oz) and a UK population of about 190,000 pairs.  It nests in bushes, stands of scrub, or dense tree cover; Ash and Hawthorn are favoured, laying four to seven eggs.  Young are initially fed on insects.