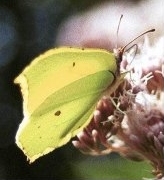 Relatively common and resident in the UK, and widely distributed throughout Europe, they have been reported as spreading northwards in recent years, particularly into northern England.  They range south to northern Africa and eastward to Japan.  They are protected in Northern Ireland but they are not listed as endangered on the IUCN Red List 2000.  It is a long lived butterfly compared with others in the U.K, and can be found during nearly any month of the year.  Grows to between 50–60mm (2–2.5in), free ranging but tends to prefer scrubby habitats and hedgerows, adults will be seen in meadows and similar areas, sipping nectar from teasel, Knapweed and Buddleia.

Seen from July to autumn, in gardens, fields and meadows, summer adults hibernate over the winter emerging at the end of March, often being the first butterflies to be seen in spring.  Sexually dimorphic with the male a bright sulphur–yellow with small single orange spots on each wing, whilst the female is a very pale yellow, almost white with even paler orange spots.  Both sexes have a uniquely shaped pointed wings with greenish veins on the underside.  The male is easily recognised but the female can be confused with a Large White – Pieris brassicae.

One generation in a year, dark green caterpillars with white side strips appear in July feeding on Alders, Buckthorn – Rhamnus, Wild Privet and Spindle Tree – Euonymus europaeus.  Female Brimstone's lay pale green eggs on the undersides of Buckthorn, one of its food plants.  The egg is bottle shaped and a whitish colour, hatching in about ten days to a green–blue caterpillar with black specks and a white stripe down each side, the pupa is a camouflaged green and leaf shaped.  At rest the butterfly always has its wings shut.  It is supposed that the term "butterfly" originally referred to this insect because of its butter–like yellow colouring, an early name being "butter–coloured fly" (possibly the source of the name "butterfly"), other theories refer to the butter coloured faeces of butterflies or to the mediaeval myth that witches transformed into butterflies to steal butter.

Agassiz #58.013, Bradley & Fletcher #1546
Conservation status - the Brimstone is not listed as a UK BAP species, it is of low conservation priority and not threatened.