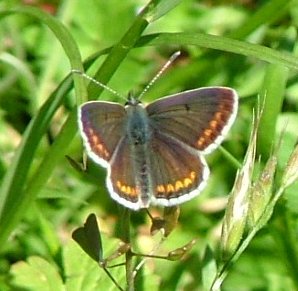 A resident species in the UK, the Brown Argus is a beautiful little butterfly with a wingspan of 22–28mm (0.8–1.1in).  The upper side of the wings are dark brown with a white fringe and orange dots along the margin of both wings with the markings in the female being slightly larger and stronger in colour.  The underside of the wings is greyish brown with black spots and orange dots on the margins.

They will be commonly found in the UK and Europe excepting Northern regions, the Middle East, Siberia and North Africa.  On the wing in two periods during April/May and August, with usually two and possibly three broods in a year, it hibernates as a caterpillar.  It favours grassy slopes, woodland clearings and heathlands but can occur in a range of other habitats with disturbed soils.  The caterpillars are a fleshy green with a pink strip down the side.

On chalk grasslands the food plant is Common Rock–rose – Helianthemum nummularium, but in other habitats it feeds on Dove's–foot Cranesbill and Common Stork's–bill – Erodium cicutarium, however it has been reported as using other Geranium species as well.  Easily confused with the Common Blue from the underside, they can be differentiated from their undersides since the Brown Argus lacks a spot on the underside of the forewing that is present in the Common Blue.