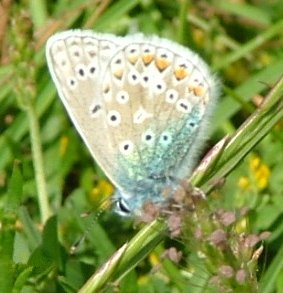 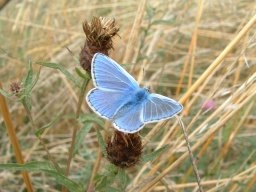 With a wingspan of 17mm (0.7in) the Common Blue is, as its name suggests, one of the more common resident butterflies in the UK, usually found in a variety of grassy areas.  In the male the upper wings are blue, whilst those of the female are brown with a hint of blue and orange dots along the margins of the wings.  The underside of the wings are light grey in males and pale brown in the females, both with a pattern of black and orange spots towards the margins of the wings.  Both sexes have a row of red spots along the edge of the hindwings.  They are on the wing from April to October and prefer open grassland, but may be found in parks, gardens and other open grassy spaces.  They have one or two broods in a year laying eggs singly on young shoots of their food plants.  The caterpillars feed on legumes such as Birdsfoot Trefoil.

The caterpillar's body tapers towards the tips, its head is black and is has a green body with a darker green line outlined in white running along the centre of the back, there is also a whitish–green line along the sides.  Other food plants include Black Medic, and White Clover.  The caterpillar hibernates over the winter as a half grown larvae, pupating in the spring.  During caterpillar stage of its life, it secrets a nectar attracting ants who feed on that nectar, and in return they protect the caterpillar from.  The Common Blue is found throughout Europe where its population is reasonably stable, it can also be found in North Africa and temperate Asia.  The female Common Blue can be confused with the Brown Argus, close identification of the underwing spot patterns will determine the species as at a first glance they appear to be identical.