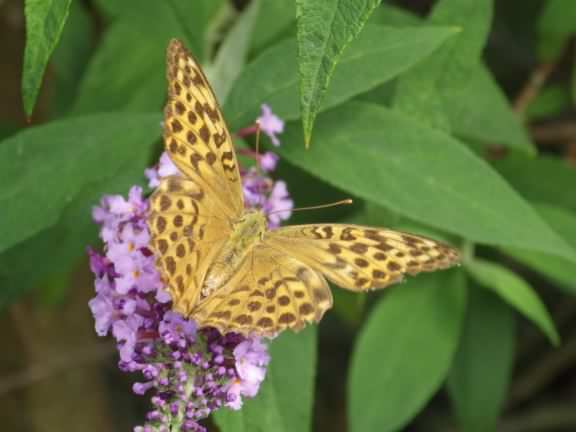 The Silver–washed Fritillary is the UK's largest fritillary, it gets its name from the silver markings found on the underside of the wings.  Males are a bright orange with black spots on the upper side of its wings and can be quite distinctive as they fly in woodland rides and clearings, investigating anything orange that could be a potential mate.  Wingspan is 54–70mm (2–2.75in).  The male has four distinctive black veins on its forewings that contain special "androconial" scales that are used in courtship.  The larger female is paler than the male, with rounder wings and more–prominent spots.  Found predominately in the southern half of the UK and much of Ireland in woodland and semi scrub, it is absent from Scotland.  Elsewhere it is common and variable in Europe and temperate Asia.  This butterfly is most–commonly found in woodland where the larval foodplant, Common Dog–violet, grows on the woodland floor.  The butterfly can also be found flying along lanes and more–open countryside in some areas.  Both deciduous and coniferous woodland is used, the presence of this butterfly is only limited by the presence of nectar sources and larval foodplant.

Adults spend much of their time in the woodland canopy feeding on aphid honeydew.  However, they often descend to nectar on Bramble blossom and various Thistle flowers, Knapweeds, Privet, Ragwort and Water Mint.  The eggs are laid singly, usually on the moss–covered north facing side of trees close to the preferred larval foodplant, Common Dog–violet.  They hatch in around 2 weeks whereupon they immediately move into crevices in the bark to spin a silk pad on which it hibernates.  In the following spring, the larva descend to the woodland floor in search of the larval foodplant.  The Silver–washed Fritillary caterpillar is a black–brown colour with two yellow lines along its back and long reddish–brown spines.

The male possesses scent scales on the upper side of the forewing that that is used to attract females and helps to distinguish it from other species.  Unusually for a butterfly, the female does not lay her eggs on the leaves or stem of the caterpillar's food source, but instead one or two meters above the woodland floor in the crevices of tree bark close to clumps of violets.  When the egg hatches in August, the caterpillar immediately goes into hibernation until spring.  Upon awakening, it will drop to the ground, and feeds on violets close to the base of the tree.  The caterpillar usually feeds at night, and usually conceals itself during the day away from its food source, but during cool weather will bask in the sunny spots on the forest floor on dry, dead leaves.  It will make its chrysalis amongst the ground vegetation with the adults emerging in June.