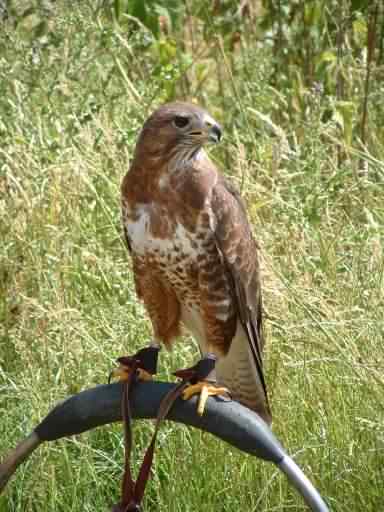 The Buzzard is a common resident and widespread bird of prey in the UK with a population estimated in the region of 80,000 birds, recovering from previous declines caused by Myxomatosis in Rabbits and illegal hunting.  Northern parts have the largest concentration but they have a population that apparently now breeds in all counties of the UK.  Its range extends throughout Europe to Western Asia.  One of our larger birds they measure 40–60cm (14–24in) in length, 110–136cm (43–53in) wingspan and weighing 0.40–1,35Kg (0.9–3lb).  They have a stock appearance with broad, rounded wings, and a short neck and tail which is fanned during flight, unlike that of the Red Kite which forms a "V" shape.  When seen soaring the colouration (from below) is superficially similar the that of the Kite with a brown body and wings with white patches at the ends.  Unlike the Kite, however these patches extend along the rear of the wing to the body in the Buzzard, again the shape of the tail aids identification at a distance.

Seen all year round, they are commonly found in wooded scrubby areas and moorland, their call, a plaintive mewing rather like a young cat, is often heard before the bird is spotted.  They feed on birds, small mammals and carrion but is an opportunist and will take larger birds like Pheasant, reptiles, insects and worms.  Fiercely territorial they do not normally form flocks, but can on occasion be seen in small groups of unpaired birds or those without a home range.  Buzzards pair for life performing a spectacular aerial displays to attract a mate.  Breeding during April and May, they make a rough nest of sticks and twigs lined with softer material (moss) in trees or on rocky outcrops, laying up to three brownish blotched eggs which are incubated by both adults hatching after around 35 days.