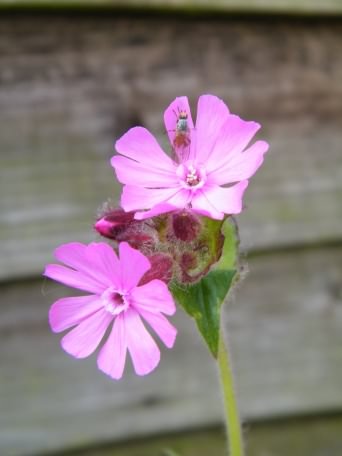 A downy dioecious perennial plant growing to about 90cm (36in) but generally around 45cm (18in), with generally pink (but variable in colour) unscented flowers 18–25mm (0.8–1in) across are seen from May to October.   Flowers of four or five deeply incised petals surrounded by a ring of sepals which are also hairy.  Very pale flowers may be hybrids of White Campion – Silene latifolia.  They grow from a rhizomatous root structure allowing it to spread preferring rich soils in light shade often in woodlands, coppiced areas, hedgerows and banks, native and abundant in the UK and common to Western Europe.

Deep green veined lanceolate faintly hairy leaves 3–8cm long (1.2–3.2in) long, from stem nodes in opposite pairs widely spaced up the stem are not toothed and the upper leaves are stalkless.  Hybrid varieties are a common plant for gardeners with many colour forms and a double flowered variety with deep green leaves called "Firefly".  Male flowers have ten stamens and a ten veined calyx, whilst the female has five styles and a 20–veined calyx maturing to an ovoid capsule containing numerous seeds, with an opening at the apex of ten recurved teeth.  The flowers produce a nectar which attracts bumblebees, butterflies, flies and several species of moth feed on the foliage.

FBCP do not advise or recommend that Red Campion – Silene dioica is eaten or used as an herbal remedy.   Crushed seeds of Red Campion are alleged to have also been used to treat snakebites.