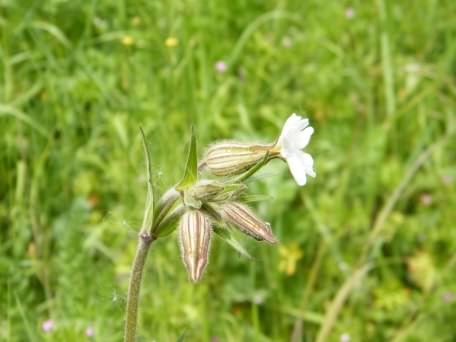 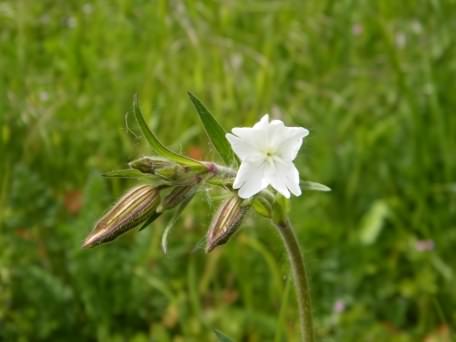 White Campion is a dioecious plant native to most of Europe, Western Asia and Northern Africa and is an imported naturalised alien in the USA thought to have arrived in ships ballast or contaminated seed.  It grows on rich and well–drained soil in fields, open areas, roadsides, wasteland, fields as a herbaceous annual, occasional biennials or a short–lived perennial plant, to between 40–80 centimetres tall.  Showy, slightly scented white flowers from late spring to early autumn are 2.5–3cm (1–1.3in) in diameter composed of five deeply notched petals and ten stamens in male flowers or five styles in the female, grow in clusters at the tops of the stems, with a distinctive inflated calyx.  Occasionally seen with delicate pink flowers as a hybrid with Red Campion – Silene dioica, also found in Brickfields Park.

opposite pairs of entire lanceolate or elliptic leaves 4–10cm (1.6–4in) long on erect branched stems 30–60cm (12–25in) high, grow from a basal rosette atop a fleshy taproot and thick lateral roots, the entire plant is densely hairy.  Not as common as Red Campion, White Campion has also been called the Grave Flower or Flower of the Dead when found as a wildflower in graveyards.  Pollinated the smaller hawk moths, bees and butterflies, the large hawk moth species are able to obtain the nectar with their long proboscises without touching the stamens or pistils, essentially stealing the nectar and not benefiting the plant.

FBCP do not advise or recommend that White Campion – Silene latifolia is eaten or used as an herbal remedy.   Apparently used in the Elizabethan period as concoction that was good for the heart.  The roots contain saponins which were used as detergents.