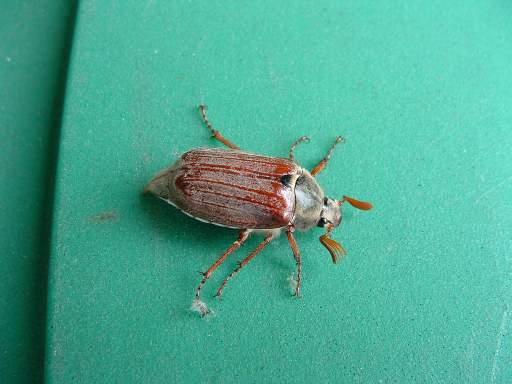 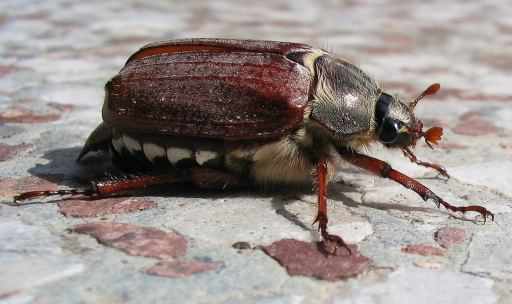 Adult Cockchafers are a large insect around 25–30mm (1–1.2in) long, with reddish–brown Elytra peppered with grey hairs giving them a "dusty" appearance.  Reddish–brown legs, darker brown hairy thorax with white haired almost "furry" underside.  The Antennae of the Cockchafer has a distinctive orange coloured "fan" or leaf shape to it which helps in identifying males and females, males have seven sections to the fan whereas the female only has six.  They have several (5) white triangle marks on a dark background on their sides.  The Cockchafer was an abundant species in the UK (mainly in the South) and Europe but habitat changes and the liberal use of pesticides have seen a marked decline in the species.

Adults are first seen at the end of May to early June, some two weeks later the female lays her eggs which she buries 10–20cm (4–8in) underground, laying in several groups to a total of 70–90 eggs, hatching after 4–6 weeks.  The larvae or "Chafer grubs" feed on various plant roots living underground for 3–4 years reaching 4–5cm (1.5–2.0in) in length.  They pupate in the early autumn taking six weeks or so the become adults, over wintering underground until the spring.  Due to the long larval stage they appear in cycles depending on region of 3–4 years, there is a longer cycle of some 25–30 years where they emerge in exceptionally high numbers.  Adults feed predominantly on Quercus spp. leaves but will also take conifer needles, their voracious feeding habits have made them a major problem in agriculture and forestry in the past.  Adults live for 5–8 weeks during which time they look for and find a mate.  They fly rather clumsily on warm evenings at or around dusk making a loud buzz like hum whilst in flight.