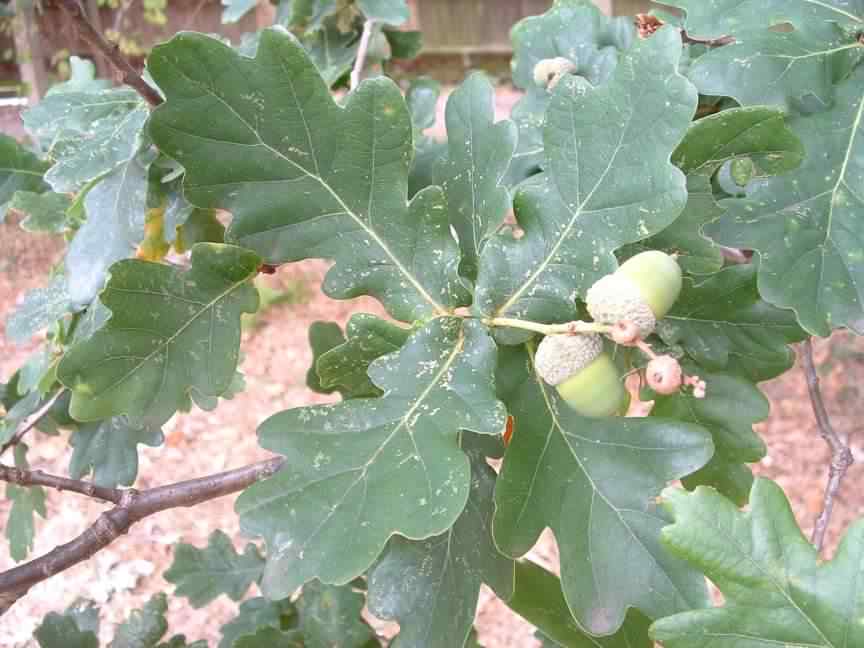 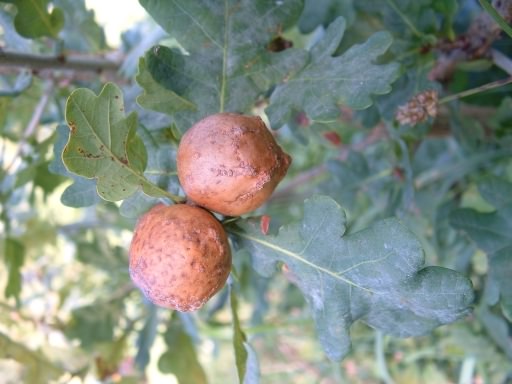 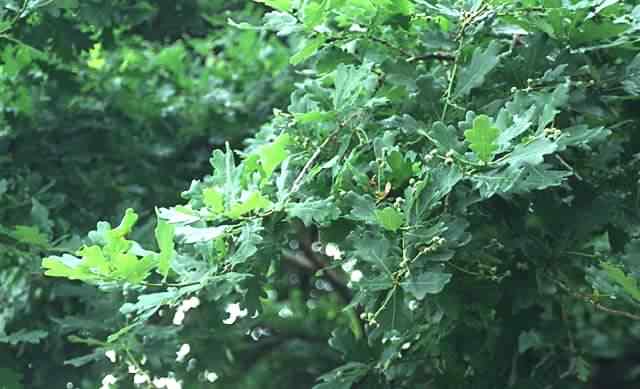 Native and typical deciduous tree of the English countryside growing on most soils to a height of 35m (115ft) and an age of 1000 years or more.  Usually found in mixed woodland in most of the British Isles (rare in the north west of Scotland), Western Europe, Ireland and Asia minor.  Will tolerate moderate flooding even by sea–water.  Dark green elliptical leaves (appearing during April) with three to six deep rounded lobes on each side with no or very small stalks.  Flowers appear April to May, male flowers of drooping yellow–green catkins, inconspicuous female flowers borne separately on the same tree during the late spring.  Clusters of fruits (acorns) up to 4cm (1.5in) held in cups on long stalks, ripen and fall during September and October, eaten by birds, invertebrates and some mammals.

Related to Sessile Oak, there are also a number of ornamental forms.  Pale brown strong wood that is more susceptible to epicormic growth than Sessile Oak, growing at a slower rate with branches that are not as straight.  The wood is used for making wine and spirit casks due to its high tannin content, acorns have been used as pig feed, also acorns were roasted and ground to produce a coffee substitute.  A sacred tree in pre–Christian times used as Boundary or Gospel Oaks.  Still a highly regarded wood for chests, coffins and Churches.  Distinguished from the Sessile Oak by the term "Sessile Short Stalks" referring to the acorns of the Sessile Oak being clustered on very short stalks whereas those of the English Oak are up to 3cm (1.25in) long.

Oak Apples are a large round gall commonly found on many species of oak.  The galls are usually 2–5cm (0.8–2in) in diameter and result from chemicals injected by the larvae of the Gall Wasp – Biorhiza pallida, who lay single eggs in developing leaf buds.  The larvae feed on the gall tissue resulting from their secretions.

Oak Marble Galls (also known as Bullet Gall or Oak Nuts), are frequently mistaken for Oak Apple due to its superficial resemblance, they again develop as a chemically induced distortion of leaf buds on English and Sessile Oak caused by the parthenogenetic Gall Wasp – Andricus kollari, again laying eggs within leaf buds.  The Turkey Oak introduced to Britain in 1735, is required for the completion of the life cycle of the gall.

Recently several forms of Oak have been shown to be susceptible to Sudden Oak Death, a disease caused by a fungus–like pathogen Phytophthora ramorum.  Widespread in the U.S., with recent reports of the disease in the UK, it has also been found on several other species, including Douglas fir and Rhododendron.  Some species are prone to lethal trunk infections, whilst other plants are infected with supposedly more benign foliar and twig infections, with these foliar infections playing a key role in spread of P. ramorum by acting as an infected reservoir.  Rhododendrons has been determined as a major source of P. ramorum.  Mortality is most common where Oaks and these foliar hosts are found growing together.