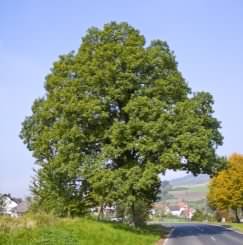 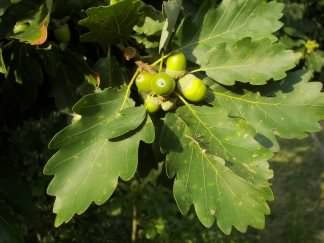 Typical oak of the British countryside growing to 40m (132ft) and living to 1000 years or more.  Prefers lighter well drained soils but can be found in acid upland soils sometimes in pure stands.  Not tolerant of flooding.  Found in West and Northern Britain and most of Western Europe and Asia Minor.  Elliptical leaves with smaller lobes than Pedunculate or Common Oak, on stalks with clusters of sessile acorns, flowers (catkin like) appear in May.  Hybridises readily with the Common Oak and can become the dominant species in an area.  Botanical description for Petraea.

Pale brown hard wood that is less susceptible to epicormic growth than Common Oak reducing the incidence of knots in the timber grows faster with straighter branches.  Depending on size and quality it can be used for sawn timber, veneer, building timber, hardwood pulp, poles, fencing, firewood and charcoal.  Tannin used to be produced from its bark for tanning leather and the acorns were formerly used to feed pigs.  Exotic North American variants Q. borealis & Q. coccinea Oaks are found in parks and gardens but produce lower quality timber.  Respectively they have red and scarlet (coccinea) leaves in the autumn both having leaves larger than British native oak species.

Recently several forms of Oak have been shown to be susceptible to Sudden Oak Death, a disease caused by a fungus–like pathogen Phytophthora ramorum.  Widespread in the U.S., with recent reports of the disease in the UK, it has also been found on several other species, including Douglas fir and Rhododendron.  Some species are prone to lethal trunk infections, whilst other plants are infected with supposedly more benign foliar and twig infections, with these foliar infections playing a key role in spread of P. ramorum by acting as an infected reservoir.  Rhododendron spp. has been determined as a major source of P. ramorum.  Mortality is most common where Oaks and these foliar hosts are found growing together.