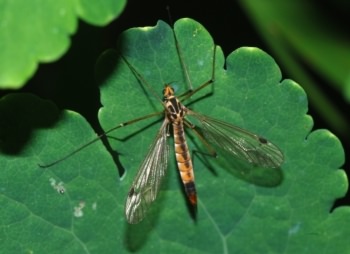 A common and widespread species in the UK having a body length of 23–26mm (0.9–1.0in) and a wingspan of approximately 50mm (2in) and seen flying from May to September.  They can be found in a variety of habitats including fields, gardens, farmland and woodland edges, woods, pastures, roadside verges, parks, allotments, gardens, hedgerows.  Adults feed on umbellifers such as Cow Parsley.  larvae (sometimes called "leatherjackets", because they have a tough, leathery outer layer) feed on the roots of various Grasses.

The body of a Spotted Crane Fly is yellow with a series of short black stripes on the thorax and a broad black line on each section of the abdomen.  The wings have a thin, yellow line near the leading edge and the females have a pointed red tip on the abdomen.  There is a black "horseshoe" mark on the side of the thorax between the wing base and the halteres, modified drumstick–like appendages which aid in balancing whilst in flight.

A very similar species - Nephrotoma flavescens has thinner black stripes along the top of the abdomen which are usually broken.