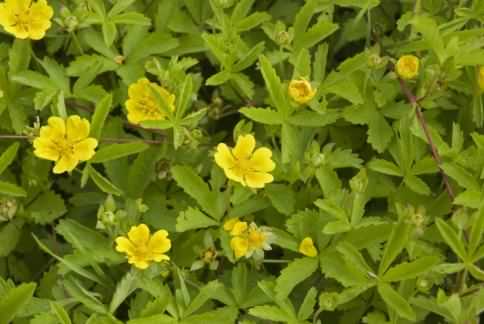 Creeping Cinquefoil is a perennial which has a vigorous creeping habit and is commonly seen in grasslands, roadsides, cliff tops and in hedge banks on most soil types.  It is a common and widespread native throughout the UK and Ireland except in the north of Scotland.  The long, stalked, almost hairless (glabrous) leaves which are very similar in appearance to Strawberry leaves have between five and seven toothed leaflets.  The flowering stalks bear solitary bright yellow flowers 15mm (0.6in) across with five heart shaped petals appear from June to October.  It can be invasive as it spreads quickly by way of the creeping stems, which root at intervals forming new plants.  Creeping Cinquefoil attracts solitary bees, whilst a Gall Wasp – Xestophanes potentillae, causes galls on the stems and rhizomes, and the Knotgrass moth – Acronycta rumicis, feeds on Cinquefoil.

Creeping Cinquefoil is one of many similar species found in the UK, Tormentil, often found on cliff tops as well as in hedgerows, is similar but has four petals, while the five–petaled flowers of Silverweed might possibly cause confusion with Creeping Cinquefoil.  Silverweed is easily distinguished by its leaves, which have many more pairs of leaflets and are silvery, at least on the underside and often on top as well.  The common English name Cinquefoil describes the fivefold arrangement of leaflets in this plant, and the second Latin name describes its habit, creeping, the stem lying quite flat.