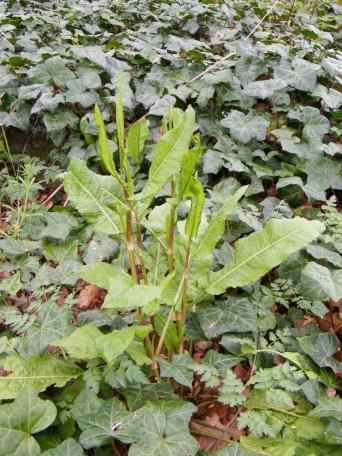 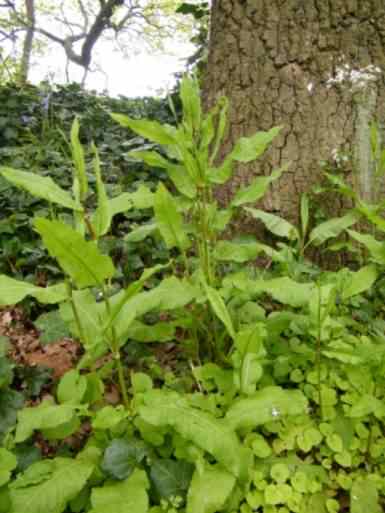 Prescribed in the Weeds Act 1959 as an "injurious weed", grows to a height of 1m (3ft 3in) sometimes reaching 150cm (5ft), a widespread and locally very common plant of field edges and disturbed ground.  Seedlings an opposite pair of narrow diamond–shaped emerge from September onwards, with the true leaves unrolling one at a time to form a roughly oval plant, remains vegetative for their first year.  Perennial rootstock producing a basal rosette of large, broad, oval to oblong leaves up to 25cm (10in) long with a central vein and rounded, backward pointing lobes at the base.  Flowering from June onwards the flowering stem is branched with numerous clusters of small reddish–brown flowers which look more like seeds, the stems die back after seeding.

Differentiated from Curled Dock by broader leaves, fruit is roughly triangular with one or two swollen seeds, a thin wing or membrane surrounding the seeds has an irregularly toothed edge.  The long tap root is more branched than that of Curled Dock.  Hybridises with Curled Dock producing intermediate plants.

FBCP do not advise or recommend that Broad Leaved Dock – Rumex obtusifolius is eaten or used as an herbal remedy   It can be used as a wild leaf vegetable.  Broad–leaved dock used to be called Butter Dock because its large leaves were supposedly used to wrap and conserve butter.  Dock leaves are a traditional remedy for Nettle stings, and suitable larger docks often grow in similar habitats to the Common Nettle.  Some literature considers Broad Leaf Dock to be poisonous.  It is listed as an injurious weed under the 1959 UK Weeds Act causing sickness in livestock, also sap from the plant can also cause dermatitis.