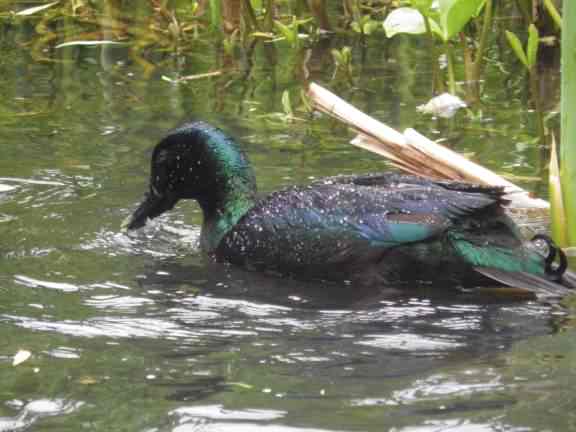 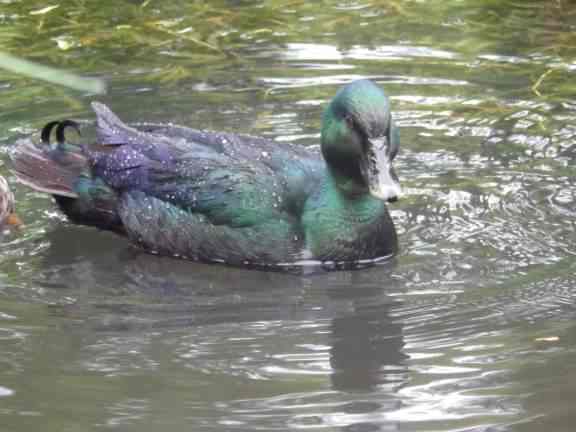 A very striking duck black duck with a beautiful green metallic sheen when the light is just right.

The Cayuga duck name is widely given as being names after Cayuga Lake in New York State, itself named after the first nations Cayuga peoples.  It is a large heavy breed with Drakes (males) weighing in at 3.5kg (7.75lb) and the ducks 3.2kg (7lb) originally used as a meat species in the USA, but now mainly as an exhibition breed.  It origin is uncertain being originally thought to be from the American Black Duck (Anas rubripes), but now mainly regarded as derived from the Mallard, borne out by Cayuga males having a curly tail like a Mallard, whereas the American Black Duck does not.  Female Cayugas can become splotched with white as they get older.

The breed is listed as dating back to the early 1800's, arriving in the UK in the 1840's apparently for the Great Exhibition of 1851, becoming a breed standard in 1901.  In the USA the breed is now listed as "threatened", in the UK numbers are not known but appears to be mainly in private collections with a few escapees, which is where we think those found in Brickfields Park may have originated.  Arrival of unusual species at Brickfields Park seems a reasonably regular occurrence, we have seen in the last few years the Golden pheasant (Chrysolophus pictus) and Ring Necked Parakeet (Psittacula krameri), a now well established species in parts of the south east.