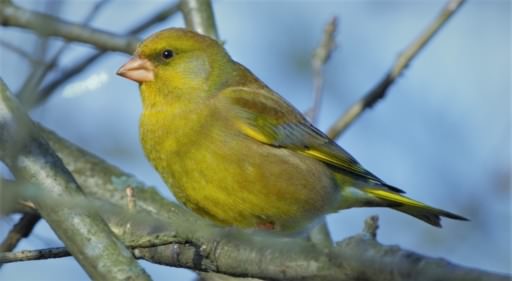 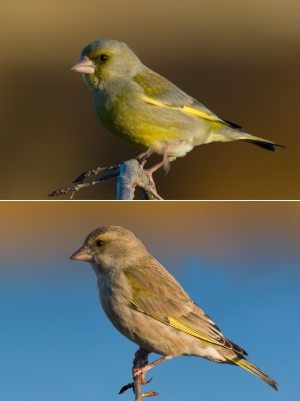 The European Greenfinch is a mainly resident small passerine of the Finch family widespread throughout Europe, north Africa and south west Asia, but some northern populations can migrate further south.  It is an introduced species in Australia and New Zealand.  Nesting in trees and bushes favouring thick vegetation it frequents woodland edges, farmland hedges, garden scrub and hedges.  Outside the breeding season Greenfinches can form large flocks sometimes mixing with other Finches and Buntings.  Adult Greenfinches reach 15cm (6in) in length with a wing span of 24–28cm (9.5–11in) and is very similar in size and shape to a House Sparrow, indeed, female and juvenile Greenfinches can be easily confused with the House Sparrow, but should still be identifiable by the pale yellow panels in the closed primaries and in the sides of the tail.  Unlike the House Sparrow, male Greenfinches are mainly green, with yellow in the wings and tail.

A Greenfinch nest is made from twigs and grass, and lined with fine roots and hair, and built by the female who lays clutches of three to eight eggs, two or three times a year.  The eggs are a glossy white or pale beige with grey–black marks, incubation takes twelve to fourteen days, with the young fledging in fourteen to sixteen days having been fed by both parents.  The Greenfinch's diet is seeds, buds and berries but has declined in farmland areas from changes in farming practices along with hedge flailing which whilst cheaper in comparison to other more expensive alternative hedgerow management methods removes many of the seeds that they would otherwise eat.