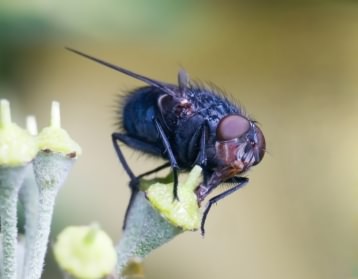 Photo ©2009 JJ Harrison
Click any photo for a larger image 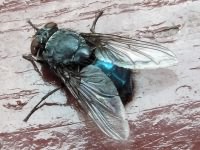 The fly Calliphora vomitoria is the type species for the Calliphora genus, very common it is to be found almost world wide in most locations, it is usually seen from May to October in the UK.  A little larger than the Common Housefly (Musca domestica) it is around 10–14mm (0.4–0.6in) long with the legs and body being covered with fine black hairs.  The head and thorax are a dull gray and the abdomen is a bright metallic blue with black markings.  It has transparent wings, red eyes, short antennae and 4 tarsi per leg.  They are very similar to another blow fly species the Greenbottle – Lucilia sericata, which as its name suggests is an iridescent metallic Green.

The pale white larvae or "maggots" of the Bluebottle feed on the rotting carcasses of dead animals, rubbish or feces whilst the adults feed on nectar, pollinating some odorous plant flowers such as Skunk Cabbage and Goldenrod in the process.  The larvae burrow into dry soil after a week of feeding to pupate in brown cocoons, emerging after 14–21 days as adults to start the process all over again.  Bluebottles are predated upon by spiders, birds, bats and beetles.