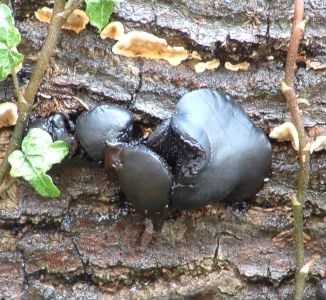 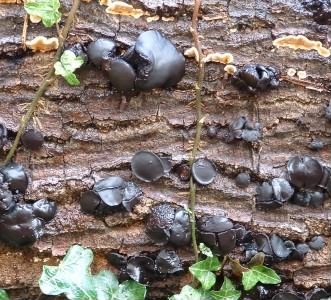 A shiny black cup shaped fungus usually seen as dense masses in lines along the bark of felled Oak, Beech and Chestnut trees during the winter months, usually between 0.5–4cm (0.2–1.6in) in diameter and about 1cm (0.4in) tall.  The upper surface is shiny whilst the outside of the cup is similar to felt and not quite as black, sometimes brown, competition with neighbours can distort the cup shape.  It us usually a soft wet rubbery or gelatinous consistency but can get rather elastic during dry weather.  Occasionally used for dying materials producing a range of colours from black through coppers and browns to grey.

FBCP do not advise or recommend that Black Bulgar – Bulgaria inquinans is eaten or used as an herbal remedy.   Black Bulgar is not edible.