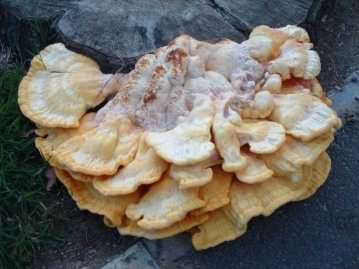 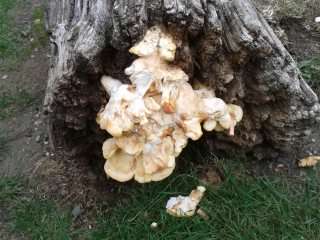 A quite spectacular bracket fungus, Chicken of the Woods grows as an annual on rotting wood especially Oak and Beech.  Growing as rather fleshy overlapping clusters with a shell shape, golden yellow colouration with reddish–orange bands, brighter underneath, it can reach quite large proportions and attaining weights in double figures.  Usually seen in late summer but can be found from spring to autumn.  The name "Chicken of the Woods"? should not be confused with Fried Chicken Mushroom or Hen of the Woods – Grifola frondosa.

FBCP do not advise or recommend that Chicken of the Woods – Laetiporus sulphureus is eaten or used as an herbal remedy.   Supposedly edible the outer areas are said to be quite tender, but there have been reports of adverse reactions to this fungus causing gastro–intestinal problems.