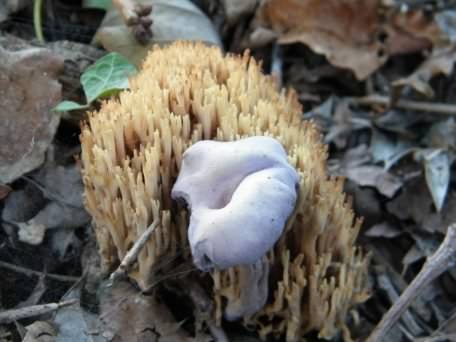 This fungus is toxic

Commonly called the Goblet from its rather obvious similarity to a wine goblet or chalice, P. cyathiformis is saprobic species common throughout Britain, Ireland and most of Europe, it is also found in parts of North America and Asia.  It is usually seen in the autumn through to spring growing on decaying hardwood in woodland, coppices and scrub.  Growing to 4–9cm (1.6–3.6in) in diameter on a long slender grey fibrous stem, it's colour is quite variable depending on local environmental conditions ranging from grey to dark brown, the cap is funnel shaped inrolled and faintly striated towards the edge.  P. cyathiformis is the type species of the genus.

FBCP do not advise or recommend that The Goblet – P. cyathiformis is eaten or used as an herbal remedy.   Not universally regarded as an edible, despite its dismal appearance the Goblet is reputed to be edible if it is cooked thoroughly although the stems are tough.  There are, however, reports of adverse reactions after eating.  Clitocybe rivulosa or Fools Funnel which is poisonous is very similar.