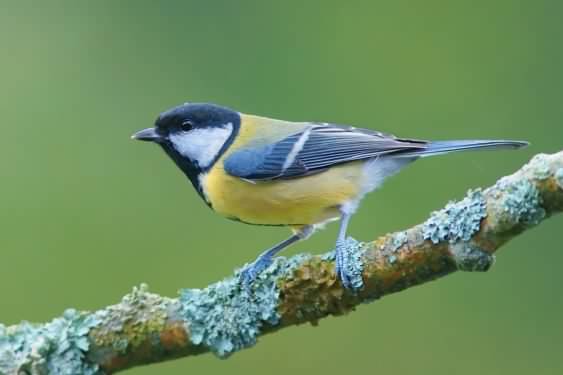 Another reasonably common resident British bird found over most of the British Isles except the far north, in parks, gardens, orchards and bushes, preferring deciduous woodland to conifer.  It is a widespread and common species throughout Europe, the Middle East, Central and Northern Asia, and parts of North Africa.  Growing to about 12–14cm (4.7–5.5in) in length weighing 20g (0.6oz), larger than the Blue Tit, the Great Tit has a yellow breast with a broad black stripe (that is wider in the male, sometimes sometimes discontinuous in females), running down the centre, a green back and a black head and neck with prominent white cheeks.

A common garden species they are predominantly insectivorous in the summer feeding on grubs, insects etc, but will consume a wider range of food items in the winter months including Beech nuts, berries, Hazelnuts, seeds and other scraps from bird tables and nut feeders, although rarely on the ground.  During the winter they form flocks that are joined by other tit species, notably Blue Tits, Long Tailed Tit and other woodland species as they search for food.  Like all tits the Great Tit a cavity nester roosting in tree holes, they also will use bird boxes, letter boxes or drainpipes.  They usually produce one or two broods a year, during March to the end of June, with an average eight to twelve eggs incubated by the female taking 13–14 days to hatch.  Both parents raise the chicks who are fed very regularly, fledging after 18 days.  The nests are usually infested with fleas and may be raided by Woodpeckers, squirrels and weasels and, and adults may be hunted by Sparrowhawks.