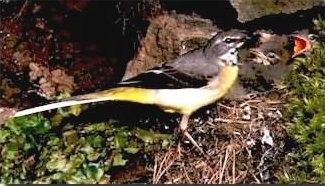 Photo ©2000 Pat O'Reilly
Click any photo for a larger image 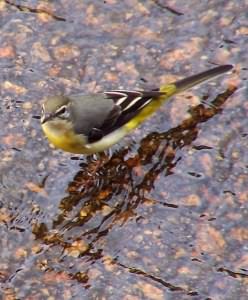 Widespread and resident, common to most of the British Isles but a summer visitor to Northern Scotland, found over most of Europe, Turkey and Asia, migrating to tropical regions in Asia and Africa, there are several populations.  Size 18–20cm (7–8in), with a very long tail, grey back, yellow breast, breeding males have a black chin.  In the winter both sexes show much less yellow on the breast.  Their breeding season is from April to July with the nest near fast running streams or rivers on an embankment between stones and roots.  In Europe the nests are often made in holes in manmade structures.  They have a clutch of 3–6 speckled eggs and multiple broods may be raised, incubation period of around two weeks fledging within 14 days.

They prey on a variety of aquatic invertebrates insects including flies, mayflies, beetles, crustacea and molluscs but occasionally take small fish, minnows etc.  They habituate streams, small rivers, open marshy ground, canals and other waterways, and in the winter time they can be found at pond margins.  It has the characteristic vertical tail wagging gait that gives the bird its name.  They are not as shy as other waterside birds, and can be confused with Yellow Wagtails, which are very similar in appearance but have a yellow head, are smaller in size with a shorter tail, and only resident during the summer.  On the Grey Wagtail the yellow on its underside is restricted to the throat and vent.  Botanical description for Cinerea