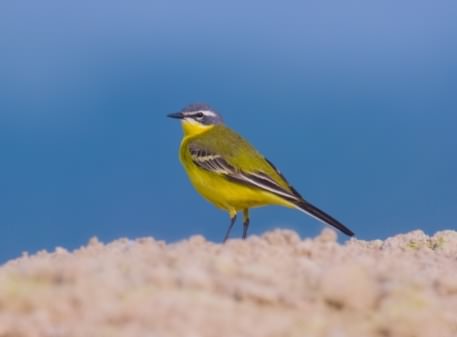 The Yellow Wagtail is an insectivorous bird is to be found in most of temperate Europe and Asia being resident in the milder parts of its range but in the colder northern and eastern areas they migrate to Africa and South Asia.  It is a slim bird 15–16cm (5.9–6.3in) long, with a wingspan of around 25cm (10in) and weighing 11–23g (0.4–0.8oz).

In the UK they are found throughout most of England, east Wales and southern Scotland during April to October in fields, damp meadows, marshes and riversides.   They are mostly yellow in colour, grey wings with white barring, a grey tail, grey head and neck with a white eye stripe and yellow throat, black beak and legs.

As with many bird species the male is much brighter in colour than the female, who are duller with much browner backs and very pale buff–yellow below.  The young are even duller with pale cheeks and a black necklace beneath the throat.  Some 15–20 sub–species exist over their range with differing colour variations, markings and subtle differences in their calls and songs.  An insectivorous bird they feed on various invertebrates in open country near water.  They can often be found around cattle and horses, feeding on the invertebrates that the livestock disturb with their hooves.  As with other Wagtails and as their name suggests they frequently wag the tail up and down as they search for food.  Their most common call is "tsweep", its song a simple repetition of this call.

The female builds a cup–shaped nest and made from grass, plant stems and roots, with a lining of hair or fur, usually on the ground in a hollow or in thick grass.  Breeding from May onwards, 5–6 smooth glossy eggs approximately 14 x 17mm (0.56 x 0.7in) in size, pale buff or grey in colour with darker spots are laid.  Incubation by the female takes around 11–14 days, fledging in a further 10–13 days.  The newly–hatched young are fed by both adults.  Easily mistaken for the similar Grey Wagtail which is however an even slenderer bird than the Yellow Wagtail with a much longer more black and white tail, as well as a broad pale wing bar that is most visible during flight.  This species has an extremely large range, but despite this the population appears to be decreasing, however in the UK the Yellow Wagtail is now classed as a BAP priority species with a distinct decline in the breeding population over the last 25 years.  The Yellow Wagtail is an Red List species of conservation concern.

The Yellow Wagtail is a listed species in the Biodiversity Action Plan for Hampshire as a present breeding species, rare in rapid decline with a high threat rating.  A Coastal grazing marsh, lowland and wet grassland species.