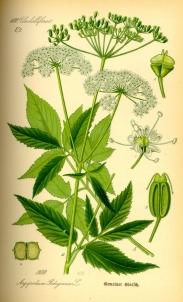 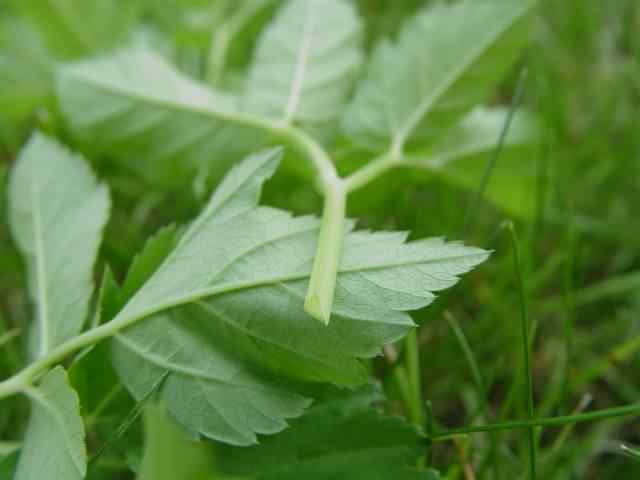 Ground Elder is an herbaceous, invasive, perennial weed that spreads via rhizomes which are capable of regeneration from very small fragments of root left in the ground, rapidly spreading to form a carpet of vegetation that will stifle other less vigorous plants.  Native to Eurasia, it is an introduced invasive in many parts of the world including in North America, Australia and New Zealand, as an escaped ornamental plant, it was reputedly introduced into the UK as a food plant by the Romans.  It readily establishes and can be found in many habitats but especially shady disturbed ground, ornamental variegated varieties are apparently less troublesome as their wild relatives but can still spread quite vigorously.

Growing in shady places, woodland edges, roadsides, churchyards, parks, flower beds and many gardens, shoots appear in the spring followed by erect hollow grooved stems growing to 1m (40in) with masses of small white flowers in umbels of 15–20 rays.  The flowers are visited and pollinated by many types of insects.  The Elder part of its common name refers to its leaves superficial similarity to those of Elder (Sambucus) to which is unrelated.  Leaves are light green toothed, ovate and trifoliate, shiny and translucent when young becoming dark green with a matt finish as they age, young leaves are said to taste like sweet parsley only better.  Its rhizomes which persist over the winter grow close to the surface of the soil so it is possible to reduce infestations of Ground Elder with relatively little effort but the smallest portion of root left in the soil will result in a new plant.

It is used as a food plant by larvae of some Lepidoptera species, including the Snout moth, Grey Dagger and Grey pug.

FBCP do not advise or recommend that Ground Elder – Aegopodium podagraria is eaten or used as an herbal remedy.   Young leaves have been used as a spring leaf vegetable best picked when it first appears (February in the UK) to just before flowering (May – June).  Once it gets older its smell becomes stronger and less palatable.  It has history as a medicinal herb to treat gout and arthritis, whilst ingested the leaves have a mild sedative and diuretic effect.