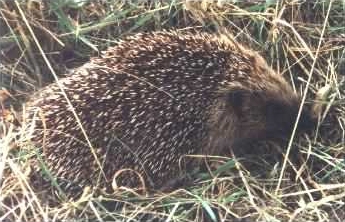 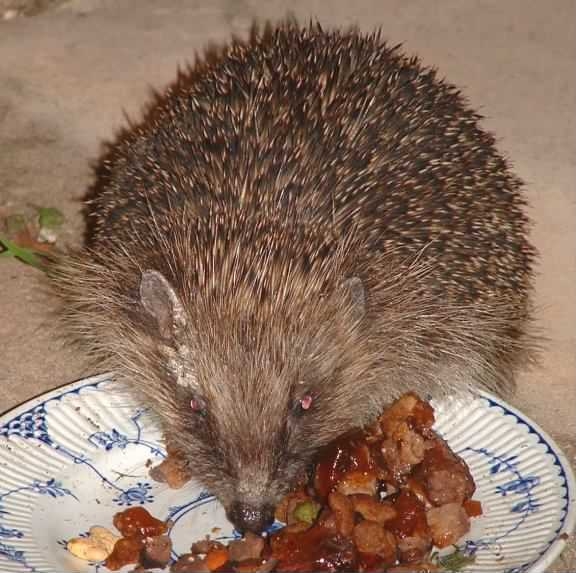 Easily recognised mammal found throughout the British Isles and Europe, where it borders with the Eastern Hedgehog – E. concolor.  Inhabits woodland, mixed forest, open country, hedgerows, parks and gardens.  A very adaptable species and like the Red fox, the hedgehog is now a common animal in towns and villages.  Growing to 30cm (12in) with a very spiny coat used for protection when disturbed by rolling into a ball.  Mostly nocturnal they spend the day in their nest of leaves and grass, emerging at dusk to forage for food during the night.  Feeds on insects, slugs, snails, worms and occasionally birds eggs or fledglings.  The female usually produces two litters of four to six pups a year after a gestation period of five to six weeks.  Young are born blind and without spines which develop after a few days.  They leave the nest after about three weeks and are able to fend for themselves after a further two to three weeks.  Hedgehogs hibernate over winter during Mid November to March in dry places, wood piles & leaves.

Many Hedgehogs are killed on the roads as their natural reaction when threatened is to roll into a ball and wait for the threat to pass.  Folk lore that the Hedgehog is immune to snake venom is false but they do seem to have quite a high tolerance to venom, and their spines also provide a good defence to any snake attacks.  Although quite a timid animal the Hedgehog has poor sight and will approach to within a few feet if you keep still whilst observing them.  They shuffle along through the undergrowth snuffling and grunting looking for slugs and snails and can move at quite a fast pace when they want, climbing any small obstacles that are in the way.