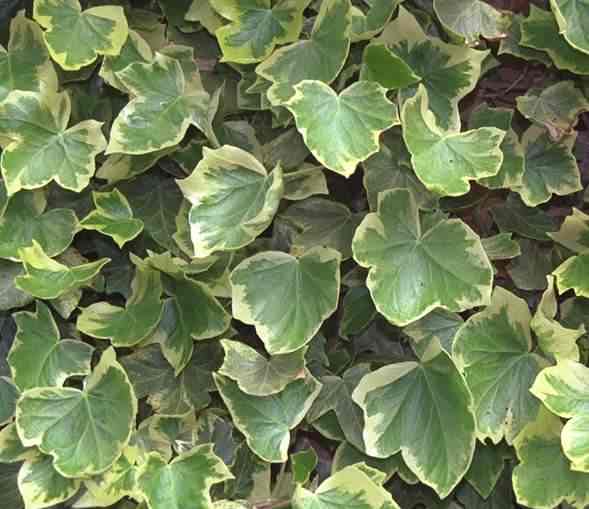 In this instance Hedera helix spp. "Caecillia" photo (top right) was found growing in the park on the border with a neighbouring private property, so it is presumed it is a dumped house plant or garden escapee.  This species is a compact Ivy not growing to the heights of a normal Ivy - Ivy, with small light green variegated leaves bordered a creamy–white with frilled edges, some leaves may be completely white, the leaves generally have a more rounded and less triangular outline to that of Common Ivy.

Ivy are evergreen climbers growing to a height of 30m (98ft) where possible after a short period of establishment, adhering to a supporting structure by short adhesive roots growing from the stem.  Where support is not available it will cover large areas of ground attempting to find something to climb.  Shiny dark green leathery palmate veined leaves, which on flowering branches are oval and pointed.  On non flowering branches the leaves are 3–5 lobed.

Flowers appearing during September and October are composed of five greenish petals ripening to black berries.  Climbs rocks, trees, fences brick and concrete, trees with growing ivy can become overwhelmed and die.  It is widespread and very common with many forms found in the wild and cultivated for ornamentation.  Food plant for the Willow Beauty moth and many other species.

FBCP do not advise or recommend that Variegated Ivy – Hedera helix ssp. is eaten or used as an herbal remedy.   Ivy is poisonous to humans and animals as it contains saponins, it is also capable of causing contact dermatitis.