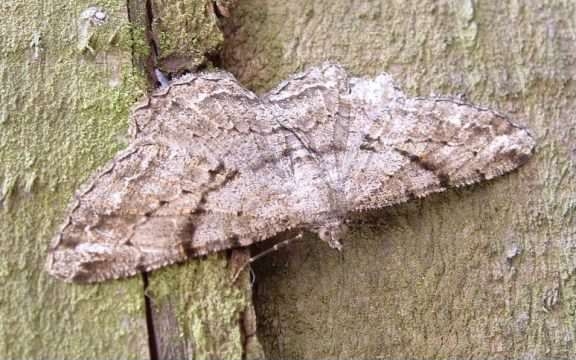 Wingspan of 35–48mm (1.4–1.9in).  A common moth in the British Isles but more localised on the north of Scotland.  On the wing June to August and occasionally to September in southerly latitudes.  Typically brownish with black and grey markings, there are also grey and a melanistic (nearly black) forms.

Found in most suitable habitats, they feed on Hawthorn and Ivy along with several other deciduous trees including Wild Privet, Plums and Birch.  Distributed throughout Europe, they over winter as a reddish–brown larvae that feed on a variety of trees and shrubs including Birch, Ivy, Privet, Apple, Plum and Yew but rarely on Willow.

Sexes are distinguished by their antennae, which are strongly feathered in the male, but almost smooth in the female.