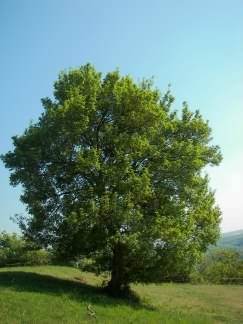 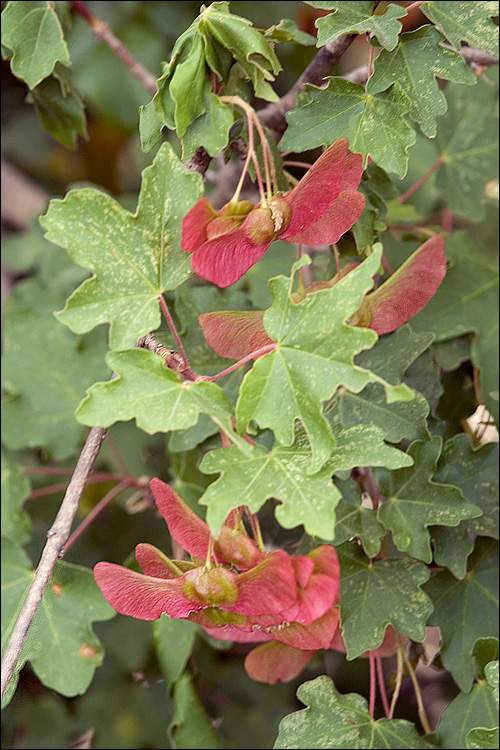 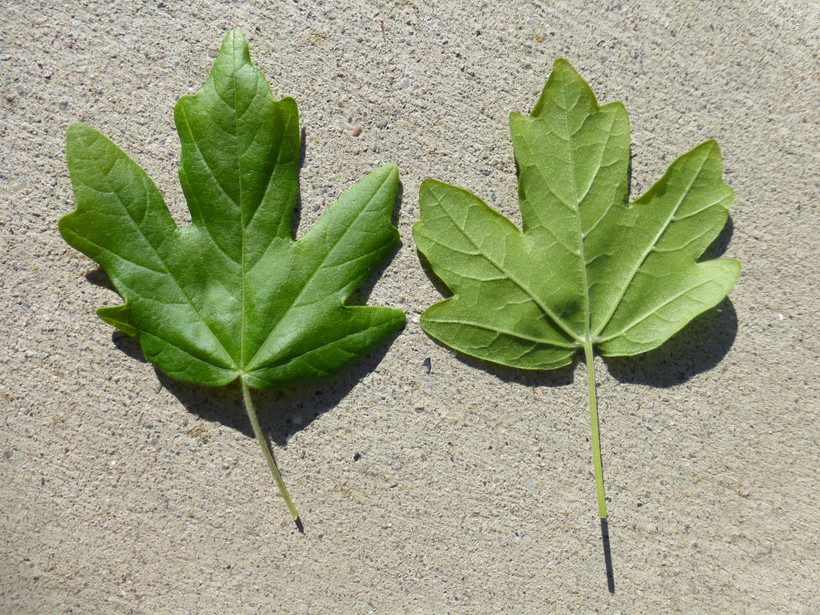 Field Maple - Acer campestre is the only native Maple in the British Isles, it is also native to most of Europe and Southwest Asia.  Usually found where chalk and limestone soils are prevalent in hedgerows and woodland margins, and so are often trimmed back, giving it one of its common names.  Called the Hedge Maple in North America, it is the Common Maple in Australia.  A small–medium deciduous tree reaching 15–25m (49–82ft) tall, with a trunk up to 1m (37in) diameter, with finely fissured, often somewhat corky bark.  The shoots are brown, with dark brown winter buds.  The deeply cut leaves are in opposite pairs, 5–16cm (2–6.3in) long including the 3–9cm (1.2–3.5in) petioles and 5–10cm (2.4in) broad, with three to five blunt rounded lobes and smooth margin.  The leaves are pink when they first appear, changing to deep green by late summer, turning back to red in the autumn dropping in November, the leaf surface may have chambers caused by a gall–forming mite.

Usually monoecious, yellow–green flowers are produced in the spring (April to mid–May) at the same time as the leaves, in erect clusters 4–6cm (1.6–2.4in) across, and are insect pollinated.  Male flowers have conspicuous stamens and the female flowers have winged ovaries.  The fruit is a crimson coloured samara with two winged seeds aligned at 180º ore more, each seed or "Key" is 8–10mm (0.3–0.4in) wide, flat, with a 2cm (0.8in) long wing, commonly known as "helicopters" or "propellers", are dispersed by the wind.

Field Maple is widely grown as an ornamental tree in parks and large gardens growing well during the first 20–25 years to around 10–15m, maturing at 50 years, living to about 100 years.  With a maximum height of around 25m (82ft), but often only 10–15m (33–49ft) high, it remains as a shrub if coppiced.  The wood is white, hard and strong, and used for furniture, flooring, wood turning, musical instruments, bowls and other utensils.  The small size of the tree and its relatively slow growth apparently make it an unimportant wood.  The Field Maple is often mistaken for the Sycamore as it also has a similar flat, five–lobed leaf shape and samaras.  The key difference is that the samara of the Sycamore are set at an angle of around 90º whilst the Field Maple's are 180º or more and a pinkish colour.

FBCP do not advise or recommend that Field Maple – Acer campestre is eaten or used as an herbal remedy.   In medicine a decoction has been used to treat sore eyes, and the astringent bark used to treat gallstones and high cholesterol.  The sap contains sugar, which has been concentrated into a syrup or used as a sweetener for food.