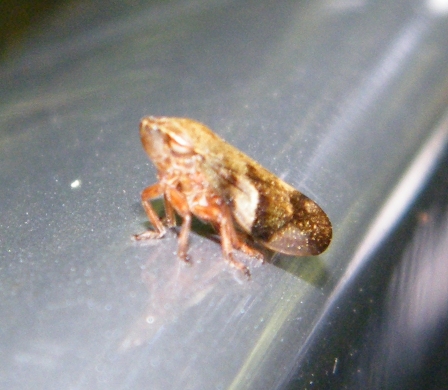 One of several similar species the Meadow Froghopper is common and widespread species of bushes and trees preferring moist habitats, forest edges, hedgerows, meadows, gardens and parks.  They are found from May to October in many different habitats throughout the UK, Europe, North Africa and Japan, it is an introduced species in America and Canada.

Froghoppers are more well known for being the source of "Cuckoo Spit", the foamy mass found on some plants, these masses are a nest for their developing nymphs providing protection and moisture during this stage of development, which can last for up to fifty days.  The eggs are laid in small groups, up to 350 or occasionally even singly.  Many plant species are used with a preference for Cuckooflower and Broom.

It is a small Froghopper 5–7mm (0.2v0.3in) long, usually a yellowish or speckled brown colour with two clear patches on the margins of the front wings, however they can be very variable in colour.  Meadow froghoppers are strong jumpers, the females are slightly larger than the male, and like all bugs the Meadow Froghopper has specialised sucking mouth parts used to feed on plant sap.