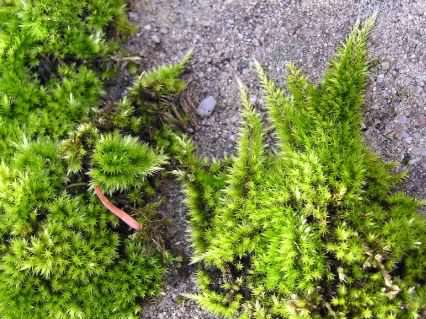 Photo ©2004 Michael Becker
Click any photo for a larger image 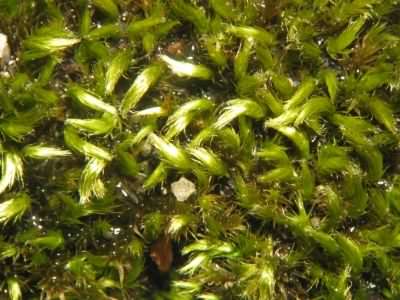 Many thanks to Fay Newbury at Reading University for the identification of this moss species – Homalothecium sericeum.

A widespread European vigorously growing moss preferring shady places found on rocks, brick walls, concrete and other hard base–rich surfaces like limestone and also on tree barks such as Ash and Elder.  Its area extends to East Asia, as far south to tropical Africa and in the east to parts of North America. The triangular leaves are silky and shiny when wet, fresh green to golden–yellow in colour 2.5–3mm (0.1in) long, widest at the base tapering evenly to a finely pointed tip with weakly toothed margins.  The elongated cylindrical spore capsules are fairly frequent, 2–3mm (0.08–1.1in) long, straight and upright on a rough setae.  The green or golden green main shoots grow closely appressed to the substrate, sometimes reaching many centimetres in length.  It is an indicator species that is particularly vulnerable to atmospheric pollution.