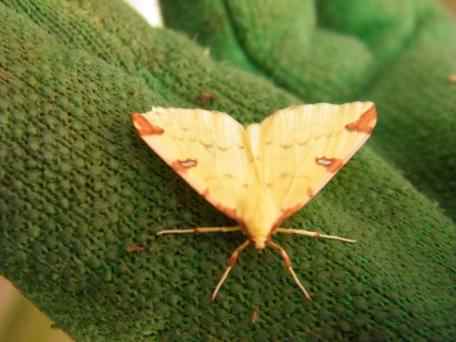 The Brimstone moth is a common and widespread species in Britain, with its range extending into Europe, it can be found in woodland, scrub and grassland habitats.  Wingspan of 30–46mm (1.2–1.8in), both wings are bright yellow with a brown edged white spot, the forewings having brown wingtip's and costa, also faint line markings or veining.  Found in a wide range of habitats, the number of broods varies from three in the South to one in the North.  Adult butterflies will be seen from April to October, whilst their brown twig like larvae feed on a wide range of trees and shrubs preferring Hawthorn and Blackthorn, they over winter as a larva or a pupa.  The caterpillar is a red–brown or bright green, with two extra pairs of prolegs on the seventh and eighth segments and hump on the sixth.

The Brimstone moth is an occasional day flying moth sometimes confused with Clouded Yellow butterfly (photo right).  The brown bordered white spot of the Brimstone moth is on the upper side at the centre of the wing leading edge, whilst that of the Clouded Yellow butterfly is a red bordered white spot in the centre of the wing, usually best seen from the underside as the species always has its wings folded when it is perched.