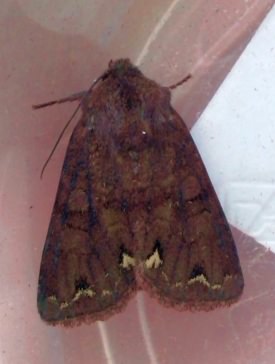 Photo ©2010 Wouter Bosgra
Click any photo for a larger image 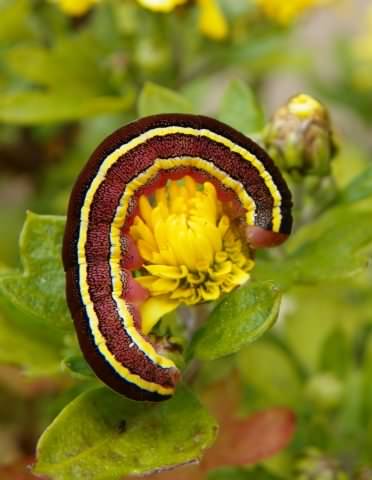 Photo is in the public domain Hos70

The Broom moth is a variable species between greyish brown to a dark chestnut with pale brown almost grey barring and markings, and a very feint white wavy sub–marginal line which has a white stigmata to the trailing corner of the forewing.  The hindwings are much paler graduating to a brown outer hairy edge.  Wingspan is 32–37mm (1.25–1.5in), the forewings are 16–20mm (0.6–0.8in) long.

It is found in the UK, Europe and further east to Russian Far East in a wide variety of open habitats, including heathland, bogs, rough grassland, open country, woodland margins and scrub.  It flies in two generations from mid–May to August.  Polyphagous larvae are seen from June to September have a distinctive pattern of purple brown or brownish green stripes alternated with 4 deep yellow longitudinal stripes.

The Broom moth is listed in the UK Biodiversity Action Plan listed species for research purposes as it has undergone a marked decline in the last few years from many factors, including habitat change, pollution and the use of pesticides.

The Broom moth is part of the Noctuoidea superfamily which now comprises just over 11,000 species after reorganisation of the some 20,000 species that were originally in the group.  Noctuidae are commonly known as Owlet moths, there are however only five Owlet moth species grouped in the Mesogona genus.