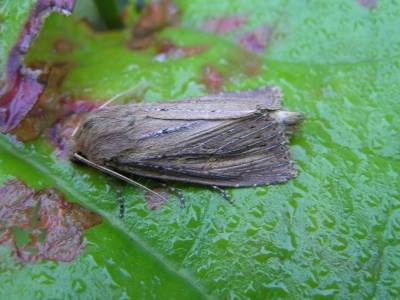 The Bulrush Wainscot moth is a large distinctive species that is usually seen from July to early October.  It is an overall light brown with a few small dark spots, white veining to the rear of the scalloped forewings, brown hairy shoulders and long pale antennae.  It has a wingspan of 45–54mm (1.8–2.1in).  The scalloped edges have small black marks resembling crescents at the outer edge, interspersed by the white veining which can appear to terminate in "arrowheads".  The hindwing on both males and females is a creamy white with a suffused black band in the subterminal area.  It is a common UK species found in a range of damp or marshy habitats, lakes, ditches, fens and pond edges, or close to them, where their larvae feed on the stems and live within Reedmace and other Typha species.  Also found in Europe, the middle east and Asia.

Larvae are a pinkish brown, slightly darker segmental bands, thin yellow stripes, spiracles look like dark spots against the pink translucent body.  Where Typha species are seen to have dark holes in the stems the larvae will usually be found head downwards within the stem.  Similar to the Large Wainscot, it can be separated by the subterminal black dashes and wedge shape markings of the Bulrush Wainscot.