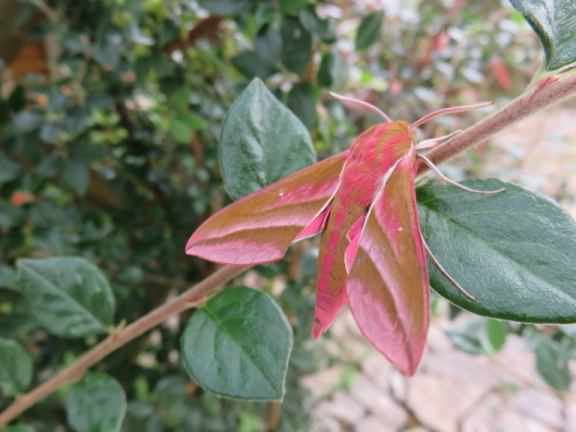 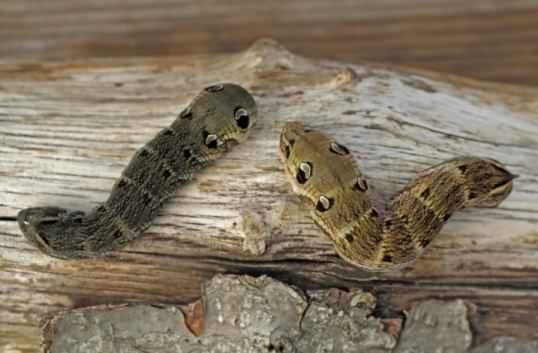 The Elephant Hawk–moth is a large and quite stunning Hawk–moth, its distinct olive and pink colouring makes it one of the most recognizable moths to be found.  Common in the UK and Europe in grassland, heathland, hedgerows, woodland edges, open countryside and urban gardens they are attracted to nectar producing plants such as Honeysuckles.  It is less common but distributed throughout the Palaearctic region.  It has olive–brown forewings outlined with pink, thin white inner edge and two pink lines also running through the wings.  The first line which is usually thicker terminates near the center of the wing close to a small white stigma.  The second line, which is below the first runs from the white inner margins to the tip of the wing.  The hindwings have a black inner half that graduates to pink to the outside edge and is outlined by white fringes.  The head, thorax, and body are also olive–brown in colour with pink markings throughout.

There is usually only one generation in a year, pale green glossy eggs are laid singly or in pairs on the host plant leaves which include Willowherbs, Himalayan balsam – Impatiens glandulifera, Field Madder, Galium species (Bedstraws), and Fuchsias, Lavender, Dahlias, in gardens.  The pupae overwinter in cocoons.  Starting out a yellowish white to green colour, the larvae when fully grown are a brown–gray colour with black dots along the length of the body with a recurved curving spine on the final abdominal segment.  Fully grown larvae can be up to 7cm (2.5in) long.  The caterpillars are said to look like an elephant's trunk, this give it its common name, they also have large markings that resemble eyes, these are used as a defence mechanism when threatened with predators.

As with most moths the Elephant Hawk–moth is nocturnal species feeding on flowers that only open or produce nectar at night.  It has very sensitive eyes that allow it to see colour at low levels of light, it is also known for its excellent hovering capability.