Photo ©2005 Soebe
Click any photo for a larger image 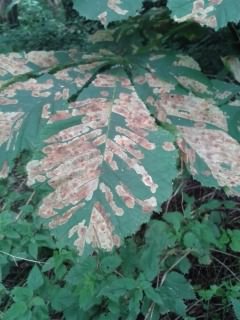 Horse Chestnut leaf miner is a micro moth and recent introduction to the UK, first reported in 2002, now spreading throughout the country although rarer in the north.   Its larvae live in the leaves of Horse Chestnut eating the leaf tissues creating small spaces within the leaf surfaces, severely damaged leaves shrivel and turn brown by late summer.  The mining activity rapidly leads to localised discolouration and at high population densities they can destroy most of the leaf tissues.  Affected trees can look as if winter has arrived early and the leaves are ready to be shed.  This process apparently does not usually affect the trees overall health although climate changes and other pests and diseases may change the situation.  Currently affected Horse Chestnut trees seem to come into leaf the next year quite normally.

Horse Chestnut leaf miner was described as a new species in 1986 having been found in northern Greece in 1984, although it is reported to have been found by the botanist Theodor von Heldreich in central Greece in 1879s.  It is now found over most of Western Europe, it is also reported to infect some Maple species including Norway Maple and Sycamore.

The moth is around 5mm (0.2in) in length, light brown in colour with several white edged black stripes, hindwings are grey with fringed edges.  Eggs are laid singly on the upper leaf surface hatching in 14–21 days.  Evolving through seven stages the larvae mine the leaf beside a vein in the leaf from which it saps.  As the larvae develop through the five instar stages the mine is enlarged to several square centimetres.  Several generations are possible per year with the last generation over wintering as a pupae as they are frost tolerant.