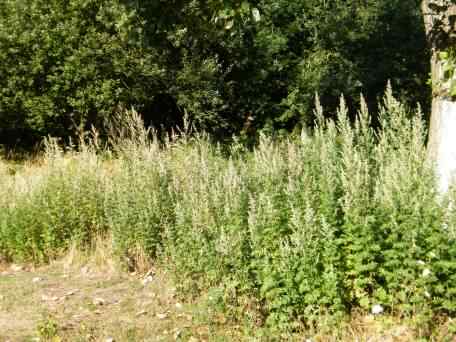 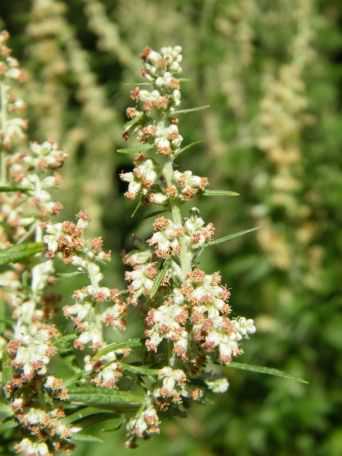 Found in hedgerows, waysides, fields and waste ground over most areas of the UK on well drained soils, growing to 1m (3ft 4in), occasionally 2m (6.5ft).  Brownish purple stems becoming woody with age.  A perennial weed with persistent rhizomes, leaves are 5–10cm (2–4in) long, alternate on the stem, deeply lobed more so on the upper parts of the plant, and have a distinctive aroma when crushed.  Undersides are a silvery–white colour contrasting the dark green upper leaf surfaces which are smooth to slightly hairy.  Inconspicuous green flowers in long terminal panicles become a reddish brown or pale yellow in clusters at the top of the plant, spreads both by rhizome and seed although viable seed are rarely produced?  A variegated form is also occasionally found.  Mugwort is related to Sweet Annie – A. annua and Wormwood – A. absinthium, but lacking the essential oils of Wormwood, it is distinguished by the leaves being white on the underside only and by the leaf segments being pointed, not blunt.  Botanical description for Vulgaris.

FBCP do not advise or recommend that Mugwort Artemesia vulgaris is eaten or used as an herbal remedy.   Said to have derived its name from having been used to flavour drinks (served in "mug"), and in common with other herbs was used for flavouring beer before the introduction of Hops.  its name is probably derived from "moughte", moth, from its use in warding off moths in clothing, another possible source is the Old English word, "mucgwyrt", "bug plant", perhaps a similar derivation.  In Holland and Germany one of its names is St. John's Plant, from the belief that if gathered on St. John's Eve it gave protection against diseases and misfortunes.

An important herb in folklore, the leaves have been used for stuffing pillows, a tea substitute, for rice cakes in Asia and in moxibustion (heat treatment) in China.  It is said to aid digestion, and the crushed leaves are used as an insect repellent.  Used in herbal remedies as a volatile oil or as an infusion with stimulant and tonic properties, diuretic and diaphoretic action, it has a bitter aromatic taste.  Mugwort has also been used as a flavouring and seasoning especially in China and Japan.  Cider vinegar steeped with fresh Mugwort for 5–6 weeks is used on salads and in marinades.  From Artemesia, the Greek moon goddess Artemis, as the plant was thought to bring on early puberty, and to help with menstruation, childbirth and menopause giving it the name Cronewort.