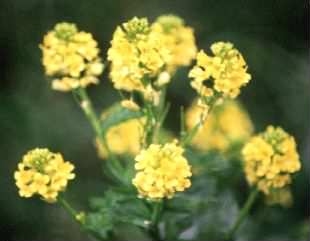 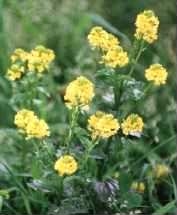 Wild Mustard is an plant growing to a height of up to 75cm (30in) with an erect, branched and striated stem with coarse spreading hairs especially near the base.  Dark green leaves are petiolate, 1–4cm (0.39–1.6in) long irregularly hairy and irregularly toothed.  The basal leaves are oval, lanceolate 4–18cm (1.6–7.1in) long and 2–5cm (0.79–2.0in) wide.  The inflorescence is a raceme made up of yellow flowers 15–20mm (0.6–0.8in) across with four petals having yellow–green sepals and corollas yolk–yellow maturing to seed pods, either somewhat hairy or not at all.  Flowers from April to October.

Widespread and common annual of arable land and waste ground growing as a field weed, Related to Sinapis alba, a variety cultivated for seeds.  It is a native of the Mediterranean but is widespread in all temperate regions of the planet and has become naturalized throughout much of North America where it is regarded as an invasive weed.  The flowers are pollinated by various bees and flies, it is the host plant of the caterpillars of some Lepidoptera, such as the Small White.  The genus name Sinapis derives from the Greek word "sinapi" meaning "mustard", the species name "arvensis" is a Latin adjective meaning "from or of the field".

FBCP do not advise or recommend that Wild Mustard – Sinapis arvensis is eaten or used as an herbal remedy.   The leaves of Wild Mustard are edible at the juvenile stage of the plant.  In animals, except birds, the seeds are toxic and cause gastrointestinal problems, especially if consumed in large quantities. Once the seeds are ground, they produce a kind of mustard.