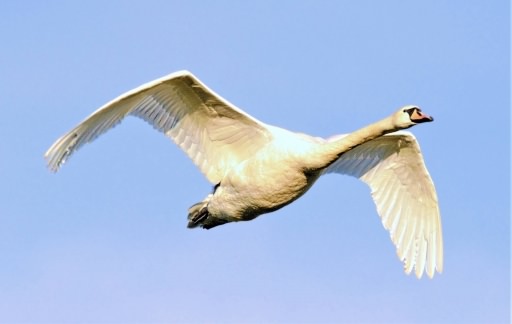 A well known and easily recognised aquatic bird of the British Isles frequenting many shallow water bodies and park ponds, found over temperate areas of Europe and western Asia.  An introduced species in North America, their increase in numbers has them now regarded as an invasive species.  There are also small introduced populations in Japan, Australia, South Africa, New Zealand where until 2010 it had full protection.  Usually reasonably tame they can become quite aggressive during mating or when protecting their young, making a loud hissing noise and flapping their wings.

It is the largest bird to be found in the British Isles with males (Cobs) weighing up to 12Kg and females (Pens) to 10Kg, young are called Cygnets.  Adults are white whilst Cygnets and sub adults are a dirty grey brown, adult wingspan to 2.5m (8ft) with a long slender neck, the beak is orange with a black knob at the base which is larger in males.  They fly with a slow wing beat and their necks outstretched unlike the Grey Heron who contracts the neck to an "S" shape.  Population of about 30,000 in the UK which has increased in recent years, due to the banning of lead shot for fishing weights and better species protection.

Breeding starts at about three years old, they lay between five and eight eggs at two day intervals, incubating them for about 37 days after the last egg has been laid, fledging after a further 120–150 days.  A very large nest often reused each year is built of twigs, leaves and feathers just above the waterline during March and May usually in a secluded spot.  Mute Swans can live to 25 years and more, but an average lifespan is about six to seven years.  The Mute Swan is the national bird of the Kingdom of Denmark.  All Mute Swans in the UK are considered the property of the British Monarch, except for flocks owned by the Vintners and Dyers Companies.  For some centuries Mute Swans were domesticated for food and other parts of the bird were also used, feathers for writing quills and wing bones for making whistles.